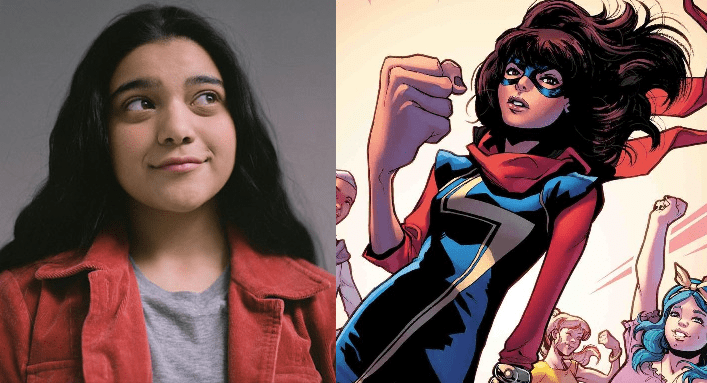 Marvel Studios has now found the actress who will play Ms. Marvel in the character’s eponymous Disney+ series: Iman Vellani, who is acting in her debut role.

Deadline reports that after an extensive search, Vellani will be portraying the character. Never heard of her? Understandable, since her big break is her first role, period. She will be portraying Kamala Khan, an ordinary Pakistani-American teenager who has a fascination with superheroes, and particularly the Avengers. However, her exposure to Terrigen Mists in a freak accident causes her Inhuman genes to activate, giving her the ability to draw mass from herself in the past and future to stretch, shrink, and embiggen herself in the present. Modeling herself after Captain Marvel, she takes the name Ms. Marvel (which, in the comics, Carol Danvers used prior to taking the more commanding alias). The character received a huge boost in popularity with the recent Avengers video game that came out this month, which put her as the central figure in a story involving several members of the team.

The character is confirmed to appear on the big screen, and it’s quite likely going to be a huge part of the Marvel Cinematic Universe going forward, with many already speculating that she’ll be involved in the forthcoming Captain Marvel sequel. It would only make sense; the Kree are high on Captain Marvel’s blacklist, and they’re responsible for creating the Inhumans. The entire Inhumans brand is likely going to be completely reconfigured with Marvel TV’s old slate of shows being over with, with the cult favorite Agents of S.H.I.E.L.D. and the abysmal Inhumans miniseries not likely to be treated as canon going forward, and Ms. Marvel is the perfect way to relaunch it given how she’s the most popular character associated with the line. Some rumors have indicated that some of the Inhuman Royal Family could cameo, and others have speculated that Captain Marvel herself will appear in at least one episode.

The talent working on the project reflects the show’s focus on an Arabic and Muslim superhero, a first for Marvel Studios. Bisha K. Ali serves as the lead writer and showrunner for the series, which has been picked up for at least six episodes on Disney+. Directors on the project include Sharmeen Obaid-Chinoy, Meera Menon, and Bad Boys For Life duo Adil El Arbi and Bilall Fallah. It remains unclear if the show will only run for one season or if more could come.

The future of the Marvel Cinematic Universe includes the films Black Widow, The Eternals, Shang-Chi and the Legend of the Ten Rings, Spider-Man 3, Doctor Strange in the Multiverse of Madness, Thor: Love and Thunder, Black Panther 2, Captain Marvel 2, Guardians of the Galaxy Vol. 3, Ant-Man 3, and reboots of the Blade, Deadpool, Fantastic Four, and X-Men franchises. Another Avengers movie is also likely, but will be a ways off. In addition to the aforementioned movies, there are nine Marvel Studios shows confirmed for the Disney+ lineup: WandaVision, The Falcon and the Winter Soldier, Loki, What If…?, Hawkeye, Ms. Marvel, Moon Knight, She-Hulk, and an untitled series starring Samuel L. Jackson as Nick Fury.