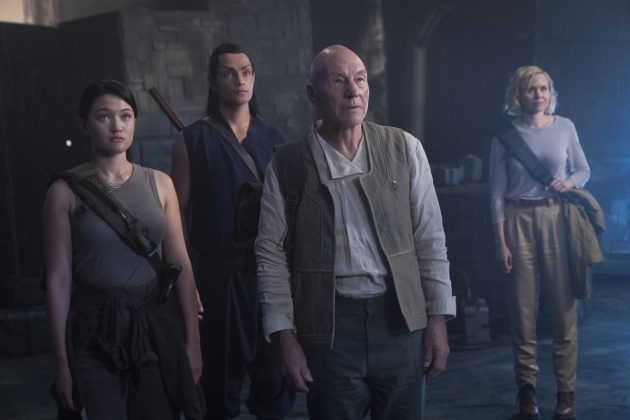 With just two episodes left in its first season, Star Trek: Picard arrives exactly where it should – on the doorstep of answers. There’s only one problem. Thanks to the feast or famine structure of the series so far, there’s really nothing left for our heroes to learn.

There are revelations in “Et In Arcadia, Ego, Part 1,” or recontextualizations at least. One of them informs the moral quandary at the heart of the episode: is murder ever justified? This stems both from Jurati’s killing of Bruce Maddox, and the dilemma faced by the strange world of synths Picard discovers. Before we get to that, let’s talk about the opening sequence.

While the teaser had a bit too much going on in it – transwarp conduits, Romulan cat and mouse games, the arrival of a Borg cube, space… flowers, there were nevertheless tremendous visuals. The arrival of the restored Artifact provides the best, both in its emergence from the transwarp conduit, and its fiery, violent atmospheric descent. 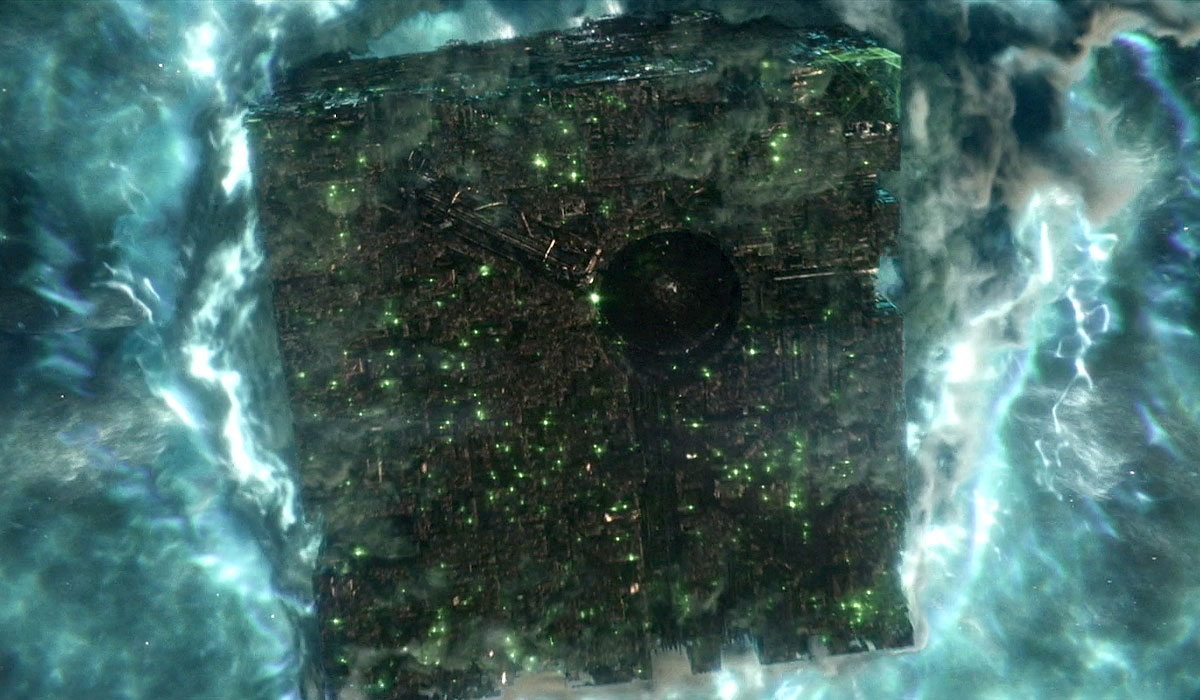 Cool as it is, the immediate arrival of the cube, along with Seven and Elnor, robs the series a bit of the calvary moment you might have expected. There’s still a massive Romulan fleet headed for the synth planet (218 ships, but who’s counting) and now the Borg cube is crashed on the surface of the planet, along with the La Sirena, without power. Thanks to the space… flowers. The orchids are actually amazing, but get no real explanation, beyond the fact they’re evidently also synthetic (there are only ten left, but more can be made.) On the surface, Jurati discovers Picard’s Irumodic Syndrome. This casts a somber pall over the episode, as his condition appears to be worsening. Nevertheless, he warns anyone off of feeling bad for him, because it would piss him off. Still, it’s not happy camping as the team sets out to find Coppelius Station, where Soji knows the rest of her kind live.

First, it’s a detour to the crashed Borg cube. The direction in this episode, by Akiva Goldsman, is often stunning in its use of light and shadow. This episode has a sense of big screen scale the others haven’t, even with their outstanding effects and production design. Picard finds Seven and Elnor safe, along with some ex-B’s, but sadly learns of Hugh’s passing. This merits only a ‘poor Hugh’ from Picard, in what is a low moment for the series. The needless killing of the character, and blink and you’ll miss it shrug in this episode from Picard over his fate just underlines what a misguided decision it was. Seven and Elnor stay at the cube to get its defenses back online, and then Picard completes the journey to Coppelius Station, where he and Soji discover a rather idyllic commune of synths.

Some of them appear to be transitional androids, gold skinned and yellow eyed like Data, though more natural. One of these is Sutra, another Daj/Soji model. Sutra is immediately compelling, not just because she can mind meld – which, wow – but because she begs some questions. Her sister, Janna, was the synth killed by Rios’ captain aboard the Ibn Majid many years ago. This encounter was treated as a first contact, but if Janna was the same make and model as Sutra, then it would have been immediately obvious to anyone in Starfleet that she shared some physical characteristics with Data. The development and history of the synths becomes even more confusing with the introduction of Dr. Alton Soong, son of Nonien Soong, creator of Data, and like all Soong characters, played by Brent Spiner. 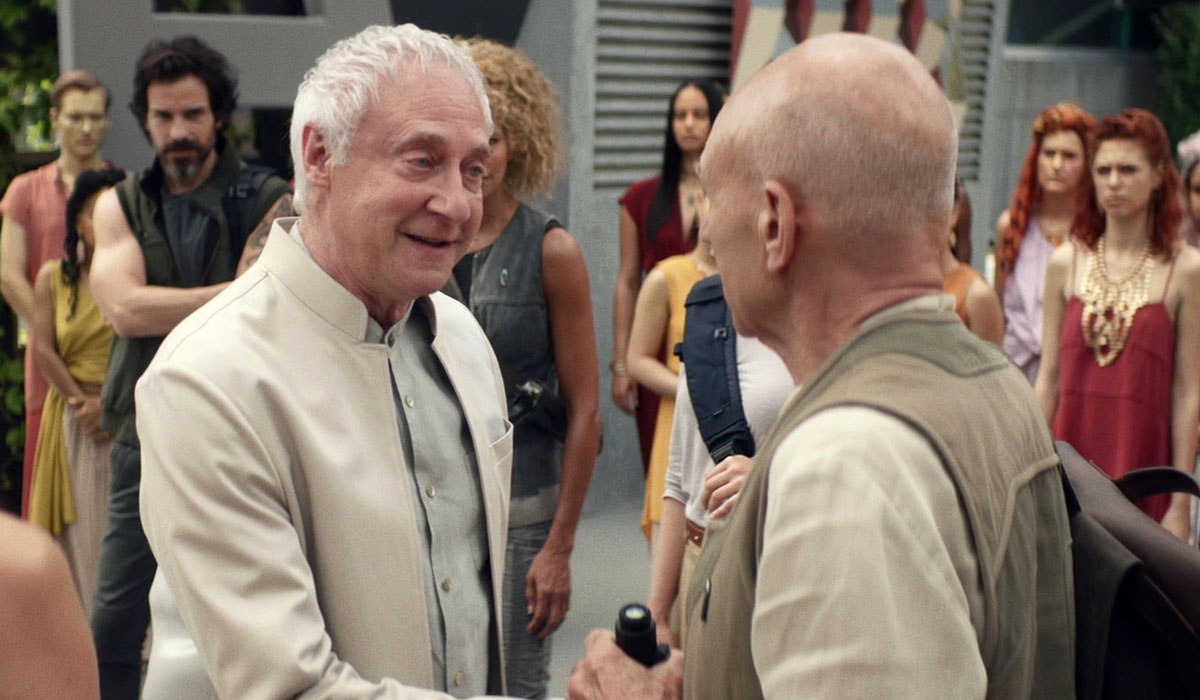 It’s a great joy to see Spiner again, though the late inning introduction of Soong, a character never hinted at before, raises some questions. Number one, would it have made more sense to have him be behind the creation of all these synths than Maddox? Soong and Maddox appear to have been colleagues in this effort to build the synths, though it’s unclear what role he played as Maddox was the one who fled after the synth ban to complete what was understood to be his work. Soji warns the synths of the imminent Romulan attack. Sutra mind melds with Jurati to see what this Admonition revealed in the last episode is all about, and we get a little more info. It’s not a warning. It’s a message.

Turns out the Admonition is a beacon of sorts left by a highly advanced race of synths, to other synthetic lifeforms. These ancient synths fled beyond the reach of organics, knowing organic life will always seek to destroy them. The Admonition exists to guide newly created synths to a safe haven. The Zhat Vash misinterpreted it, though that becomes an open question as the episode goes on. The first order of business is to get the La Sirena back up and running and get out of Dodge. As that proceeds, with a magic device one of the synths that apparently does anything (does it fix plot holes?), Picard tries to contact Starfleet Command. Soji ruminates on the question of whether she should kill Narek, now a captured prisoner, fearing he’s too dangerous to be left alive. What’s the logic of sacrifice? When is killing ever justified? These questions hang over the episode, and the series, and morph into a real quandary as we slowly realize that all these vaguely hippie synths are not all rainbows and flowers.

Sutra evidently lets Narek escape, and one of the synths is killed in the process. She also proceeds to try and answer the Admonition and call the ancient synths who left it to her aid. Picard warns against this, fearing that the ancients will destroy organic life, but Sutra doesn’t seem to care all that much. Picard begs them, swearing to protect the synths and be their advocate. “Starfleet will listen to me,” he says, but this is met with scorn. “No, they won’t,” Soong says and he’s right. Starfleet didn’t listen to him before with the synth ban, and they won’t now. Picard’s legendary ego suffers its final, fatal blow here, and we’re left with the realization that the man who this series is ostensibly about is a bystander. He’s taken into custody by the synths, and we’re treated to an impressive shot of the inbound Romulan fleet. 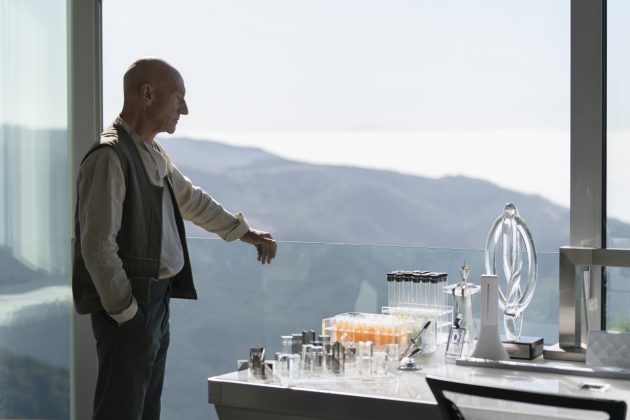 Like any penultimate episode, ‘”Et In Arcadia, Ego, Part 1,” is mostly set-up. Events feel forced, and sometimes routine. We have all the answers now, it seems, and all that’s left is the battle for the fate of all life in the galaxy.