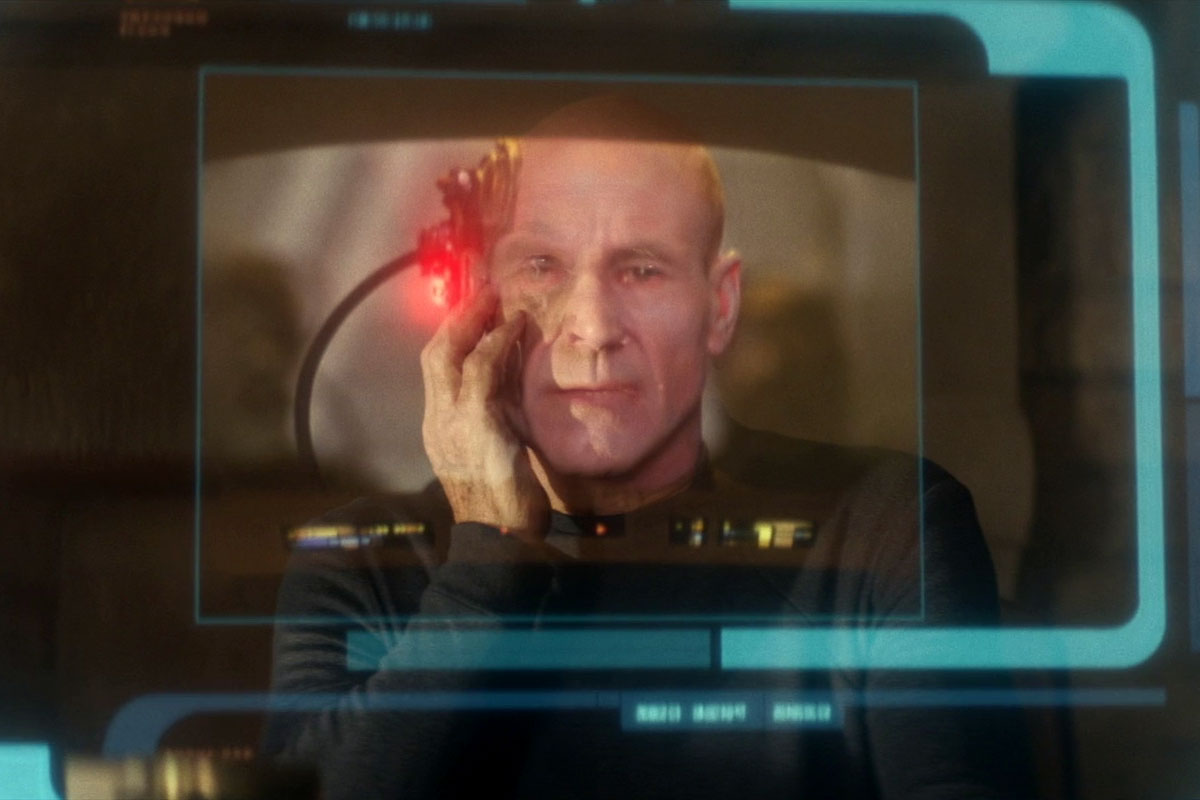 Star Trek: Picard has come under some fire recently for how much the Federation and Starfleet have appeared to change since we last saw them. In this week’s episode, we discover one thing is still very much the same: Jean-Luc Picard’s hate and fear of the Borg.

Picking up where we left off last episode, we find Picard and the ersatz crew of the La Sirena en route to The Artifact, a Borg cube in Romulan space that has been cut off from The Collective. The Romulans have been slowly reclaiming assimilated Borg and studying them (for reasons unknown) and it’s part of the mystery as to why Soji, the focus of Picard’s search, is there. As the crew figures out a way to simply wander into Romulan space, enter a Borg cube and unravel a mystery with intergalactic threads stretching deep, deep into the inner workings of the Federation, Picard’s focus is on only one thing.

Picard’s view on the Borg has not changed at all since his last canon encounter with them in First Contact. His anger remains, at virtually the same pitch it did when he resolved to destroy them once and for all. So does his fear, which manifests in aspects of PSTD we really haven’t seen in him before. He finds it hard to breathe and focus, and has to retreat from the others. It’s sad, and realistic, to find his experience lingers with him after so many years. As he studies The Artifact, we’re treated to an inspired shot by director Maja Vrvilo where an archival image of Locutus of Borg is superimposed over Picard.

In another scene that underlines we’re not in Trek Kansas anymore, the crew drags a drunk Raffi, bottle in tow, to the bridge so she can strong-arm an old friend into giving Picard diplomatic clearance to The Artifact. It works, because plot, and results in a strange bit of applause from Picard and crew. The woman is drunk and just sabotaged a friendship. Don’t know clapping is in order. 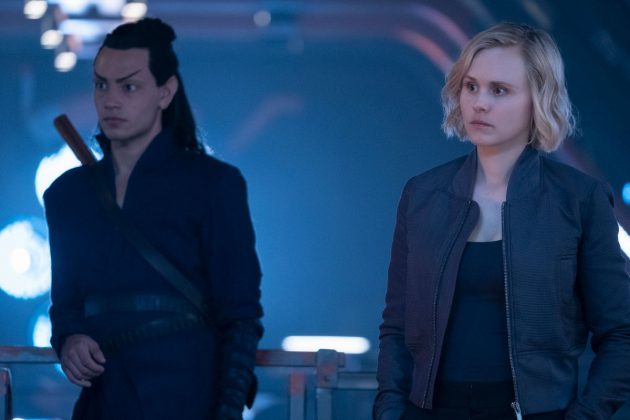 The rest of the crew remains equally distracted. Elnor, delightfully, leans full on into Legolas/Captain Obvious mode, to the chagrin of the others. Especially Dr. Jurati, who has just murdered her lover in cold blood, and now wants to ice that down with some grief-inspired sex with Rios. Mostly, it works, though Jurati’s motivations remain as nebulous as everything else, which is a problem.

Thankfully, it begins to resolve. On The Artifact, Narek continues his sensual investigation of Soji and her origins. This thread does advance this week, but its opening scenes didn’t inspire a lot of confidence. The show seems to voicing its own criticisms with the Narek / Narissa plot – ‘That’s your progress?’ There isn’t any. At least, at first. This thread is mostly passive and treading a lot of water. A great example of this is Narek suddenly employing his Tal Shiar training and pressing Soji with the fact her calls back home to Mom all last 70 seconds each. He would have known this in advance of any discussion of the dreams that bother her. At least this does trigger an immediate response from Soji, and confirms that Mom is simply a program and exists to put Soji in timeout anytime she gets close to the truth.

Still, Soji reacts to her discovery about the truth about her mom – and her age (37 months) – in a strange fashion. Her response is anger and sorrow, not confusion; why doesn’t she try to call her sister, Dahj? Her behavior, like Narek’s, it seems is to get to them to a well-directed set piece where Soji walks a life-size Romulan board game and remembers that she grew up on a planet with two blood red moons. Once Narek gets this info, with no planet name or coordinates mind you, he attempts to kill Soji. Sure.

Lucky for her, Picard arrives. In the best moment of the episode, and the series so far, he reunites with Hugh, the director of the Reclamation Project. The reunion of Picard and Hugh is AMAZING and presented in a way that you suspect Hugh’s introduction here was meant to be a revelation. He comes out of the shadows, and it’s decidedly more ceremonious than his initial return. Why wasn’t his reintroduction held until this moment? His being the project director could have been withheld, and only alluded to. In any case, it’s a beautiful moment, full of warmth and as the kids say, all the feels. 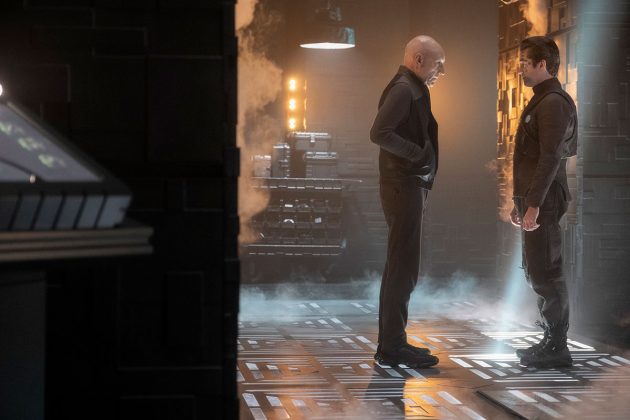 Their reunion a great reminder of Picard’s successes, which the show and he sorely needs. It is lovely to watch Hugh do for Picard what Picard did for him so long ago. Hugh shoulders Picard through the fear and pain of revisiting the Borg cube, and shows us that Jean-Luc Picard is a hero. He’s also a complex character and it’s in this moment that the show really threads the needle it’s been aiming for.

Picard left Starfleet over its treatment of the Romulans. As he gently corrected the reporter he interviewed with in the first episode, the lives at stake weren’t just Romulan lives, they were simply lives. But Picard doesn’t view the Borg as such. He never has. That was on full display in First Contact, when he casually identified a drone he’d just killed as one of his crew. Aboard The Artifact, Hugh guides Picard through the Reclamation process, and in doing so, opens Picard’s eyes to who the Borg were, and are. The scene is punctuated by Hugh telling Picard he could become an ‘advocate for Borg.’

The episode ends with the two threads of the season colliding in spectacular fashion. Soji escapes with Picard off the cube in a glorious bit of lore diving, as Elnor stays behind to red shirt some Romulans. Where does it go from here? The Romulans need to find where Soji came from, and so does Picard. All signs point to a world with two blood-red moons.