The Before Trilogy: Romance In Real-Time 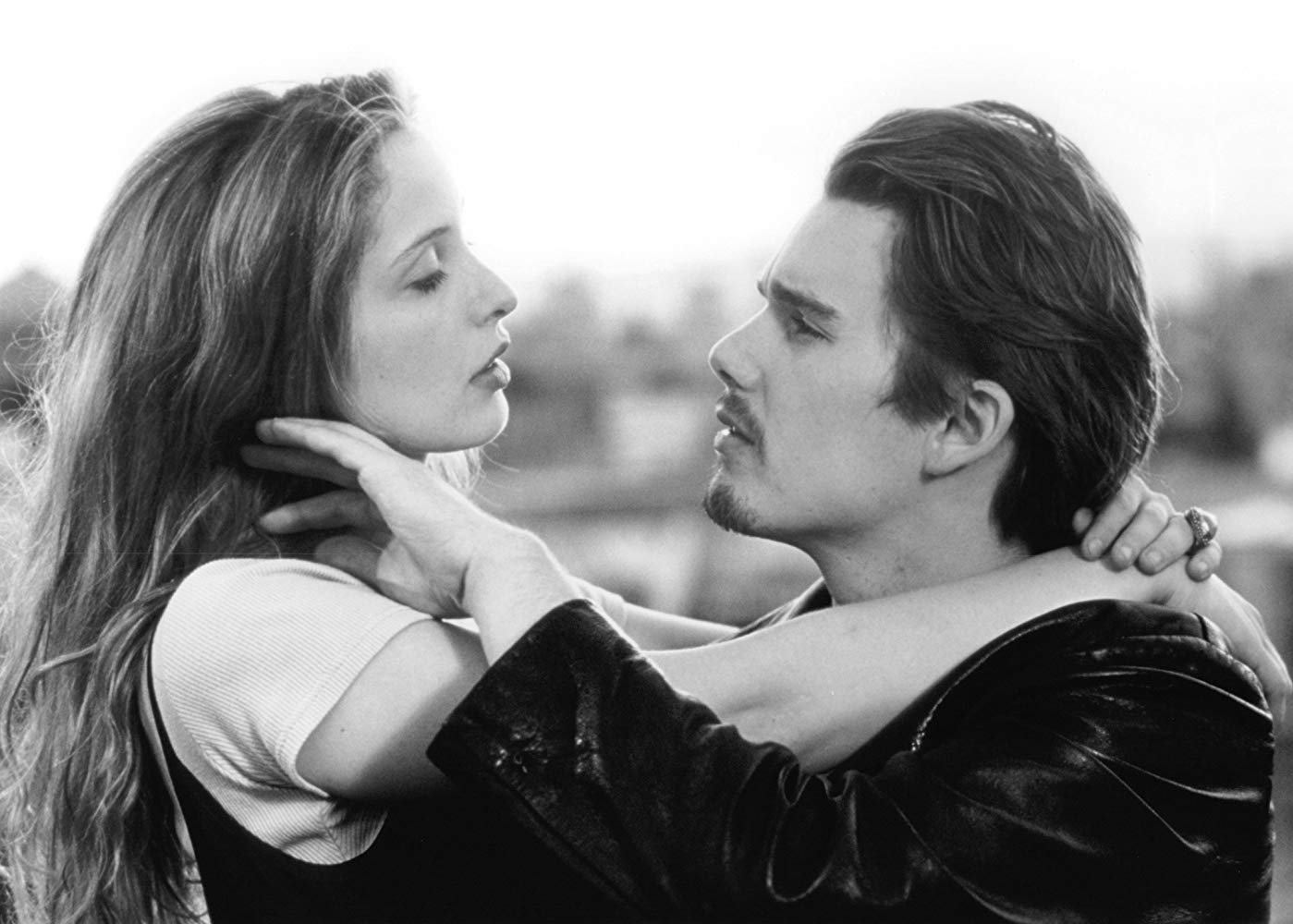 Celebrate this Valentine’s Day Weekend with a little-known trilogy of films that present one of the greatest cinematic love stories of all time.

“Think of it like this: jump ahead, ten, twenty years, okay, and you’re married. Only your marriage doesn’t have that same energy that it used to have, y’know. You start to blame your husband. You start to think about all those guys you’ve met in your life and what might have happened if you’d picked up with one of them, right? Well, I’m one of those guys. That’s me y’know, so think of this as time travel, from then, to now, to find out what you’re missing out on.”

There you have one of the cheesiest, yet most effective pick up lines in cinema history spoken by actor Ethan Hawke in the opening minutes of Richard Linklater’s Before Sunrise (1995). The mention of time travel in the above dialogue is notable considering that Linklater would be Oscar nominated twenty years later for almost making the fictional concept a reality with his 2014 film Boyhood. For those that don’t recall, Boyhood was Linklater’s coming-of-age tale shot over the course of 12 years utilizing the same actors, allowing us to watch a child literally grow before our eyes over the course of three hours.

Although a unique and remarkable achievement, Boyhood wasn’t his first attempt to tell the evolving story of a group of characters over the course of several years. That honor goes to 1995’s Before Sunrise and it’s subsequent sequels, Before Sunset (2004) and Before Midnight (2013). The major difference is that while Boyhood allows us to watch the years-spanning growth of a character in one sitting, The Before Trilogy (as it’s come to be called) shows us the real-time progression of a relationship between two people over the course of three films with an almost decade-long gap between each.

In Before Sunrise we’re introduced to Jesse (Ethan Hawke), a Texan vacationing in Europe who, while on a train to Vienna, meets a young Parisienne woman named Celine (Julie Delpy) who’s returning from visiting her grandmother in Budapest. The two strike up a conversation and an immediate connection is apparent. As they pull into Vienna, Jesse suggests that the two of them get off the train together and continue their conversation while seeing what the city has to offer. Celine agrees to his proposition and the remainder of the film follows their journey throughout the night as they learn more about one another and rapidly fall in love. As the sun rises the following morning, the pair says their goodbyes and make a pact to meet back in Vienna exactly one year later and pick up where they left off. Fade to black; roll credits.

On it’s own, Before Sunrise is a simple tale, and an effective depiction of two hopeful young people falling in love. Rather then the cliched vision of romance we’re used to in Hollywood films, Linklater (based partially on a real event from his own life) tries to give us as truthful an account as possible of what it’s like to meet and truly connect with someone for the first time. Though few of us would have been lucky enough to have Vienna as our backdrop, the interaction between Hawke and Delpy and the development of their relationship is something each of us can probably find some way of relating to. It helps that Linklater also doesn’t burden us with a myriad of pointless supporting characters or unrealistic scenarios. The few additional characters that are present only appear briefly as they enter and quickly exit the lives of our protagonists. Even the film’s setting, beautiful as it is, takes a backseat as we remain focused on Jesse and Celine. We’re essentially a fly on the wall, present through the entirety of this chance meeting, but only as observers. On paper it may not seem like much, but watching it play out is a remarkable experience, and it would still remain so even if the story had ended there.

However, Richard Linklater wasn’t quite through with the conversation between the two young lovers just yet. Possibly inspired a brief vignette featuring the characters in his 2001 experimental animated film Waking Life, Linklater decided to provide an answer to his ‘will they/won’t they’ scenario nine years later in Before Sunset. 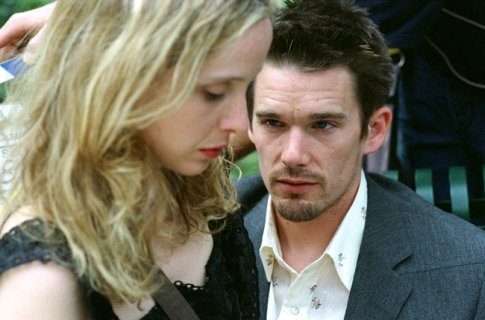 Playing out in real-time, we’re re-introduced to Jesse nine years after the events of the previous film and are quickly made aware that he and Celine did not re-unite in Vienna as originally planned. In the intervening years Jesse has become a successful author and written a novel based around the events of that night. While finishing up a publicity tour at a small bookshop in Paris, Jesse is completely caught off guard by the sudden appearance of Celine, who frequents the bookshop and has shown up on the day of his book-signing to see him.

Re-united for the first time in almost a decade, the two attempt to pick things up where they left off; finding out who they’ve grown into as people and to find out if what they’d experienced years before was a fluke, or something truly meant to be. I’ll refrain from going into more details, but suffice to say that all three principals would again reunite another nine years later in 2014’s Before Midnight, bringing this unusual trilogy (seemingly) to a close.

I mentioned before how Linklater uses his own form of time travel both in Boyhood and The Before Trilogy to tell two stories over the course of real-time. While I enjoy Boyhood and applaud the effort made to bring something like that to the screen, I have to confess that I personally feel that The Before Trilogy is more effective. The reason for this is admittedly personal and not something that can easily be duplicated now that all three films are readily available. While they can definitely be enjoyed by new viewers, the trilogy will always have a special place in my heart because of where I was in my own life when each film was initially released.

It just so happens that this Valentine’s weekend also marks my 39th birthday, which means that I was 14 when Before Sunrise was first released, 23 when Before Sunset came out, and 32 just a few years ago when Before Midnight capped things off. Which essentially means that I grew up with these characters. Revisiting them every nine years and seeing how they evolved and grew as people coincided with my own evolution as I transitioned from a young high school kid feeling alienated from everything and everyone, to a recent college graduate on the cusp of moving away and starting a life for myself, and finally to a husband and a father with a home and family of my own. Watching Jesse and Celine grow with me over the course of almost twenty years has been a unique and emotional experience for me, and I can honestly say that The Before Trilogy is the most realistic example I’ve ever seen of the natural progression and evolution of a relationship between two people that I’ve ever seen put on screen.

Each film presents Jesse and Celine at a critical point in their lives that we can all relate to. In Before Sunrise they’re the epitome of innocent idealistic youth; two kids who aren’t smart enough yet to not believe in the idea of love at first sight and just naive enough to think that it’s better to plan an overseas rendezvous in a year’s time rather then just exchanging phone numbers.

In Before Sunset, both are at that unique point in life where they’ve both lived in the real world long enough to see it for what it is and feel its pressures weighing on them, but still young enough to vividly remember what it was like to have been young and carefree. They both know that it’s logically impossible to regain something they only had for one night almost a decade before, but still youthfully naive enough to try anyway. 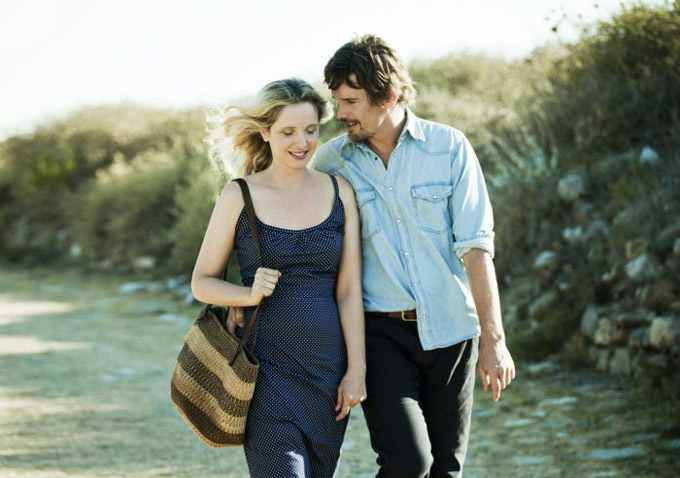 And then we come to the elephant in the room that is Before Midnight. I’d like to keep some of the mystery of how this story plays out, but I will at least say that this entry is the most difficult to watch and not one I’d recommend as “happy valentine’s viewing.” This isn’t a reflection on it’s quality as a movie; far from it. Midnight is just as good as it’s predecessors. The issue lies in the story that it’s trying to tell and the effect that it has on us as the viewer who have in our own way become a part of this relationship and grown to love these characters. But that’s also the film’s greatest strength. It respects us not only as a viewer but as a participant in this ongoing relationship to not avoid the part of the story most other films try to avoid.

The curtain call of your typical great Hollywood romance ends with a kiss and a promise that your characters will live happily ever after, but never dares to show you what that “ever after” is. From a marketing standpoint alone, who would want to see that? What is it like to see two characters you’ve grown to know and care about and see what their lives are like when they’ve been together for a decade? When the idyllic picture you and they both had for the future has morphed into the reality that nobody is perfect and no relationship is going to be smooth sailing indefinitely. Some of you may find it hard to watch, and I don’t blame you for it. Movies, at their core, are escapism. We don’t usually go to them because we want to see our own flaws thrown back in our faces. We want to be uplifted. We want that happy ending. I won’t go as far as saying that what we’re given here is an “unhappy” ending, but it’s definitely not sunshine and roses.

Even so, there is hope. There is a light at the end of the tunnel. If there’s one major take-away to be got once the credits have begun to roll on Before Midnight it’s that real true love between two people can weather any storm. What you have may not be the idyllic picture you saw of your future when the two of you first met, but it’s really never going to be. And that’s okay. Taking the good with the bad, it’s the life that you’ve built together and will continue building for years to come. Love is never as perfect as it may initially seem, and that’s okay. There’s no such thing as “perfect.” It’s an amazing lesson to be had and one that Richard Linklater along with Ethan Hawke and Julie Delpy have taken decades to try and teach us. It’s also the most honest and accurate depiction of real lasting love put to screen, and I dare any of you to argue the point with me.

For those of you who’ve never seen them, I envy you your first viewing. For those that have, I’d like to leave things on a light note by offering you an experiment that will allow you to view the trilogy from a whole new perspective: re-watch it in reverse. Beginning with Before Midnight, watch a mature adult relationship that doesn’t quite have that same energy that it used to have slowly work it’s way backwards to the simple story of a girl who once met a boy on a train and what happened when she picked up with him.

Think of it as time travel, from now to then, and find out what you’re missing out on.