Douglas & Kubrick on the Warpath: An Appreciation of ‘Paths of Glory’ 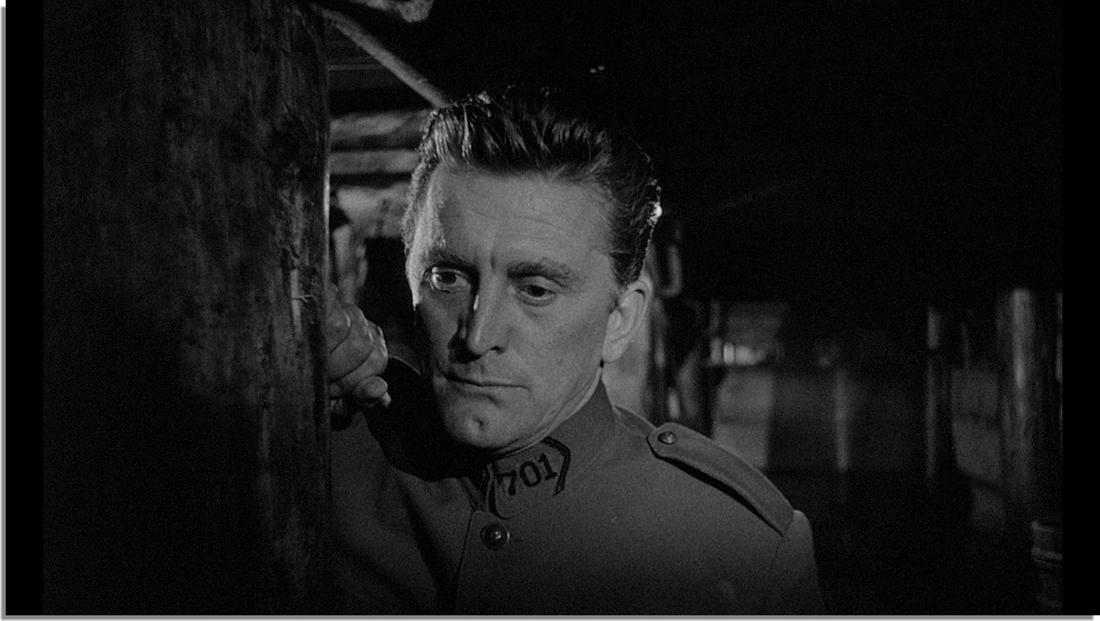 With his recent passing, it’s time to give some love to an often overlooked gem from Kirk Douglas’s long and storied career.

The recent death of legendary actor Kirk Douglas on February 5, 2020 is doubly sad when put into the context of his place in cinema history. Aside from his significance as an actor/producer with a body of work filled with legitimate cinema classics, Douglas’s passing at the ripe young age of 103 also severs what could possibly be our last direct tie to the world of Old Hollywood. With a career starting back in 1946, Kirk Douglas came to fame in the last decades of the old studio system, allowing him to work with a number of equally legendary film stars including (amongst others) Burt Lancaster, Robert Mitchum, Doris Day, Lana Turner, and John Wayne as well as high profile directors like Billy Wilder, Richard Fleisher, and John Sturges.

Yet even with a filmography encompassing close to 100 roles (several of which any actor would gladly have listed on their resume), Kirk Douglas is likely most remembered for his title role as the escaped slave-turned-rebellion leader in Stanley Kubrick’s 1960 epic Spartacus. The film is so widely known and recognized in the careers of both Douglas and Kubrick that it tends to overshadow the pair’s first collaboration; 1957’s Paths of Glory. This is highly unfortunate since I feel that Paths of Glory is the superior film in many ways.

I must confess that I hadn’t even seen the film until last year when it showed up on The Criterion Channel (Odd, considering that I’d even taken a Kubrick appreciation class in college). That initial viewing blew me away and I immediately purchased a copy on Blu-Ray not only so that I could enjoy the film again, but also so that I had the opportunity to share it with others. Shortly after, I watched it again with a close friend. He was equally impressed, but also surprised that he had never seen it or heard of it before then. With so much attention being paid to Kirk Douglas’s career in honor of his passing, I can think of no better time to help bring added attention to this film and allow others to discover this seminal work from both Douglas and Kubrick. 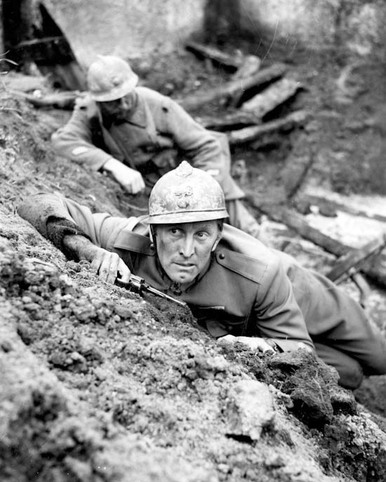 Kirk Douglas plays Colonel Dax, the commander of a French regiment in World War I who’s been tasked by his commanding officer, General Paul Mireau, to capture a key German-held position known as the “Anthill,” despite the obvious futility of the endeavor. Unable to disobey a direct order, Dax leads his men into battle.Tthe results set the stage for a completely different kind of conflict that will be waged on friendly soil with the lives of three men at stake. To say much more than that would rob a lot of the power the movie contains as its story unfolds.

The film is based on a 1935 novel by Humphrey Cobb, which was itself based on a New York Times article about a real life incident involving five French soldiers in WWI who were executed by firing squad for cowardice. Kubrick, having read the novel as a teenager and thinking it had the potential to make a great movie, developed a screenplay and began shopping it around the studios. After multiple rejections, it finally caught the eye of Kirk Douglas, who agreed to not only star but also produce the film through his own company, Bryna Productions, with United Artists handling financing and distribution. 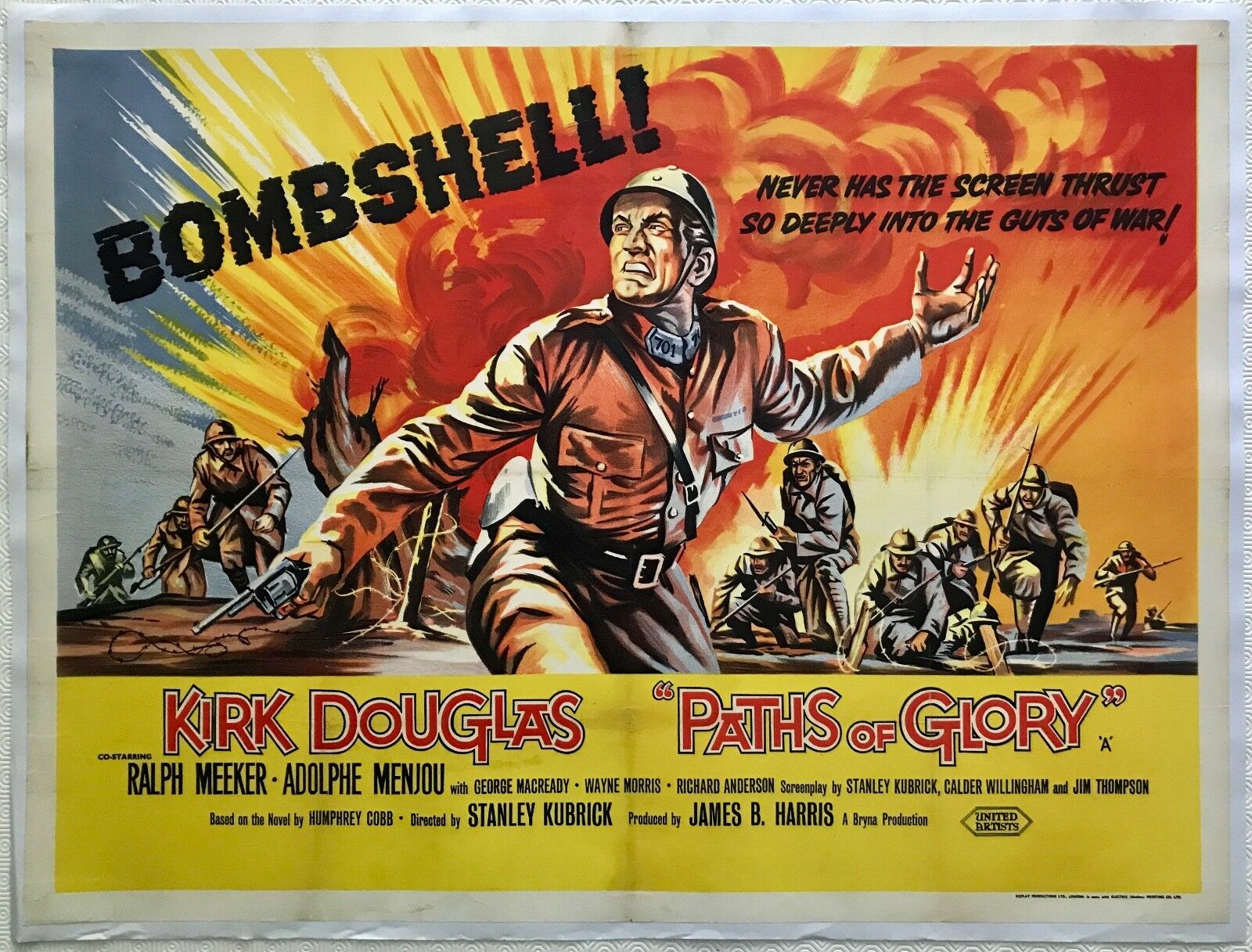 I’ve read that the studio wasn’t quite sure how to market Paths of Glory, and the above poster can testify to that effect. Prior to 1957, most American-made war pictures were patriotic visions of our boys going abroad and fighting the good fight. While never outright glorifying the act of war, the films were meant to help with the war effort during WWII and instill a sense of patriotism in the viewer. Just about every poster for the film utilized the above image of Douglas holding his revolver, poised to lead his men into battle; evoking the same kind of gung-ho “once more unto the breach dear friends” imagery audiences had come to expect from a war picture.

Nothing could be more misleading.

Paths of Glory is one of the most anti-war war films you’re ever likely to see. It was something that even I wasn’t ready for upon my initial viewing. The conventions that I was used to seeing told me that the soldier’s efforts to take the Anthill would be the major conflict of the film; with Douglas and co. overcoming major obstacles until finally succeeding or else dying heroically in battle. In fact, the attack on the Anthill comprises a fairly short portion of the film’s brisk run-time and acts more as a catalyst for the major conflict to come, rather then being the conflict itself.

It’s very telling that in a film set during WWI from the point of view of the French military, the German enemy (although mentioned often) is never seen throughout the entire picture. That’s because Kubrick and Douglas never intended for the film to be about the conflict between the French and the Germans. Instead the focus is on the futility and absurdity of war, as well as the corruption and injustice that can exist within one’s own government; the enemy within, rather than from without. It’s a movie that forces you to stop and think about the countless lives lost in an effort to advance one’s position only a few feet, and just how expendable those lives can often be seen by those in charge.

Douglas’s Col. Dax is at the forefront of all of this; a man torn between his sense of duty and his sense of morality. By the time the film is over we’ll see him stretched to the absolute breaking point as he’s constantly confronted with superiors whose only goal is to advance (in more ways than one) without any regard for the lives or well-being of his men. It’s an amazing performance, and I would argue that it is miles above his portrayal of Spartacus.

The supporting cast is nothing to gloss over, as each character portrayal is excellent, particularly George Macready as Gen. Mireau and Wayne Morris as Lt. Roget. It’s easy for the other characters to be shunted aside or lost in the mix in a film with such a high-profile lead actor, but Kubrick manages to make a full blooded characters out of almost everyone on screen. Although Douglas is undoubtedly the lead of the picture, the film is very much an ensemble piece and everyone involved brings their ‘A’ game.

This is also very much Stanley Kubrick really beginning to develop the look and style he’d be so clearly identified with in years to come. The wide-angle tracking shots of the battlefield and the POV shots in the trenches are the kind of imagery you really don’t see in films of the same period. It’s interesting to note also that Spartacus, made three years later by Kubrick but with very little creative control, actually (in my opinion) looks older and a bit old fashioned compared to this film. The pacing is also quite good and a tight script leaving no excess fat. At a run-time of under 90 minutes, the film moves at a brisk pace and it’s hard to take your eyes off of it once it’s started.

If you’re a fan of either Kirk Douglas or Stanley Kubrick but find that you’re only familiar with their more high-profile works, then by all means give this film a watch. I have a feeling your experience viewing it for the first time will be very similar to mine.

One last note: When discussing the film in 1969, Kirk Douglas said of Paths of Glory, ‘There’s a picture that will always be good, years from now. I don’t have to wait 50 years to know that; I know it now.’

He was right then, and he’s still right today.