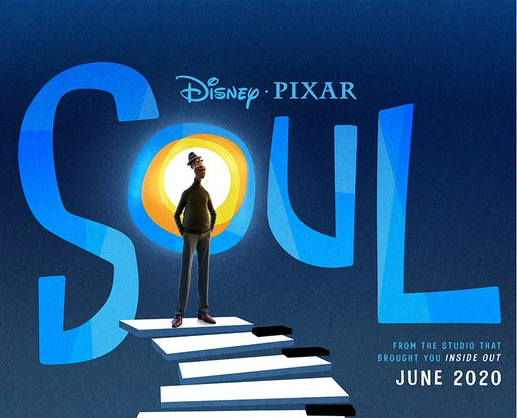 The movie follows a middle school music teacher named Joe Gardner, who dreams to play jazz on the stage. Just when Gardner finally gets his chance to play at the Half Note Club, he suffers from an accident which separates his soul from his body. His soul is then transported to the “You Seminar”, where he assists soon-to-be-born souls come to formation before they move into newborn infants. One of these souls, named 22, has a dim outlook on life, and she and Gardner have to work together in order to accomplish their goals; Gardner, to get back to his own body before it’s too late, and 22, to finally get into a body of her own after years of searching.

This sounds like pretty heady stuff for a family-friendly movie, but as the trailer reminds us, this is being made by the team that brought us Up and Coco, so best not be betting against the computer-animated geniuses at Pixar! Here’s the link to the trailer, which emphasizes a jazzy soundtrack and the more realistic portions of the animation design before moving on to a brief gag segment with the ethereal forms of Jamie Foxx and Tina Fey’s characters:

Pete Docter, who is also Pixar’s chief creative officer, has been nominated for eight Academy Awards so far. He has won twice, nabbing Oscars for Best Animated Feature for Up and Inside Out. The screenplay was completed by Docter, Fey, Mike Jones, and Kemp Powers. The movie also has a poster, which you can check out below:

Check out the brand-new poster from Disney and Pixar’s Soul, in theaters June 19, 2020. #PixarSoul pic.twitter.com/YUDFjWuNek