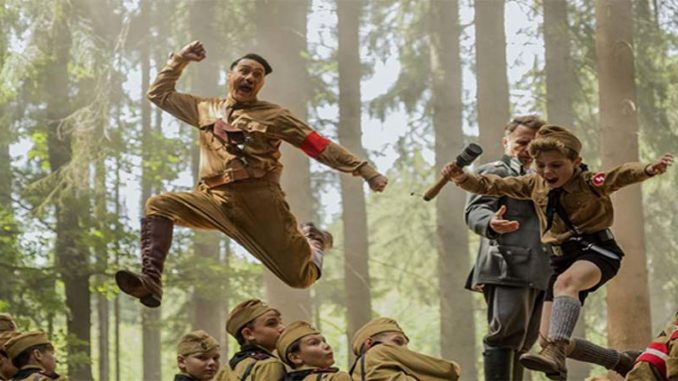 If you’re Taika Waititi, then you may ask yourself: “How do you go about following up revitalizing the Thor franchise with Ragnarok?” His answer: portray an imaginary version of Adolf Hitler in Jojo Rabbit, an irreverent indie dramedy satirizing hate that he is also writing, directing, and producing.

Jojo Rabbit, based on the novel Caging Skies by Christine Leunens, might just have the strangest premise for a movie about Nazi Germany ever: a young boy named Jojo, who is being indoctrinated into a Hitler Youth camp, lives a relatively happy life with his single mother. When he finds out that his mother is Anti-Nazi and is harboring a Jewish girl in their attic, Jojo has a crisis of conscience that results in him coming up with an imaginary friend… a goofy version of Adolf Hitler himself, who doubles as a father-figure to the boy. Together, the two go on a journey that allows Jojo to confront nationalism and racism.

Back in July, Fox Searchlight released a minute-long teaser hinting at the kind of bizarre imaginary Hitler shenanigans people will be in for with a pretty postmodern look at one of the most despicable regimes in history, and the children who grew up in that kind of a world:

More recently, they’ve released a new trailer showcasing more of the film’s story and hinting at some of the melancholy and – surprisingly – heart behind such an offbeat premise:

Under the wrong hands, this kind of premise could go south quickly for coming across as insensitive. However, early buzz suggests that Taika Waititi – who has Jewish heritage, and has made it abundantly clear that the film does not glorify Nazis in any way – has managed to nail the film as a comedy-drama and coming-of-age tale. Jojo Rabbit might make for one of the strangest movies of the year, but it will be no less memorable for its approach.

Jojo Rabbit will be released on October 18, 2019. The film will have its premiere at the Toronto International Film Festival on September 8, 2019.