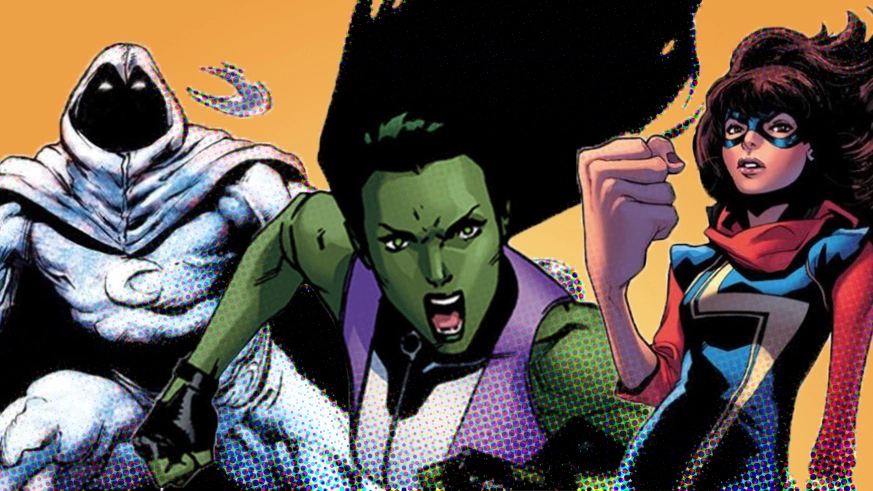 Marvel Studios dropped news on three high-profile Disney+ projects on us out of nowhere at their portion of the Disney+ panel at Disney D23. The new series being announced include Ms. Marvel, Moon Knight, and She-Hulk.

While word about Ms. Marvel already got out to the trades, these other two series are significant surprises in their own right. Moon Knight, as an IP, is much more in-line with the kind of content that would have gone to Netflix before they shuttered their partnership with Marvel for a handful of reasons: it stars Marc Spector, who after receiving a vision of an ancient Egyptian deity lost to time, gains superhuman abilities that wax and wane with the moon itself. However, in the process, he develops dissociative personality disorder and progressively has to fight his mental illness as he fights crime as a vigilante. More recent takes on the character would translate to the kind of content that would be TV-MA onscreen, but due to the show being on Disney+, the series will instead have to go for a TV-14 tone.

Meanwhile, She-Hulk is interesting more from a legal standpoint. Lawyer Jennifer Walters’ story involves her cousin, Bruce Banner, giving her a blood transfusion after she’s gravely injured and there’s no other option, which allows her to transform into a Hulk herself. However, while Banner struggles with accepting the Hulk for years, Walters quickly gets used to it and finds herself more comfortable when she’s “Hulked out” than when she isn’t, to the point where she commonly appears in court in her empowered alter-ego than as her more timid counterpart. But what’s interesting is that her movie rights, along with the movie rights to The Incredible Hulk, are wrapped up at Universal, which led several to presume that the TV rights were theirs as well. Not so, it appears, and that could also be good news for a standalone Hulk series for Disney+ down the line.

Of these projects, only one has a creator behind it: Bisha K. Ali with Ms. Marvel. All three shows won’t hit until 2022 at the earliest, so it only makes sense that they aren’t that far into development. Nonetheless, each show indicates how versatile the ever-expanding setting can be for years to come.

Marvel’s Phase 4 slate includes Black Widow, The Falcon and the Winter Soldier, The Eternals, Shang-Chi and the Legend of the Ten Rings, WandaVision, Doctor Strange in the Multiverse of Madness, Loki, What If…?, Hawkeye, Thor: Love and Thunder, Ms. Marvel, Moon Knight, and She-Hulk. A third Spider-Man movie is believed to be part of the slate, but is currently in flux due to conflicts between Sony Pictures and Disney. More movies in Phase 4 could be announced later today.