‘Batman Beyond’ Turns 20 With a Complete Blu-Ray Collection 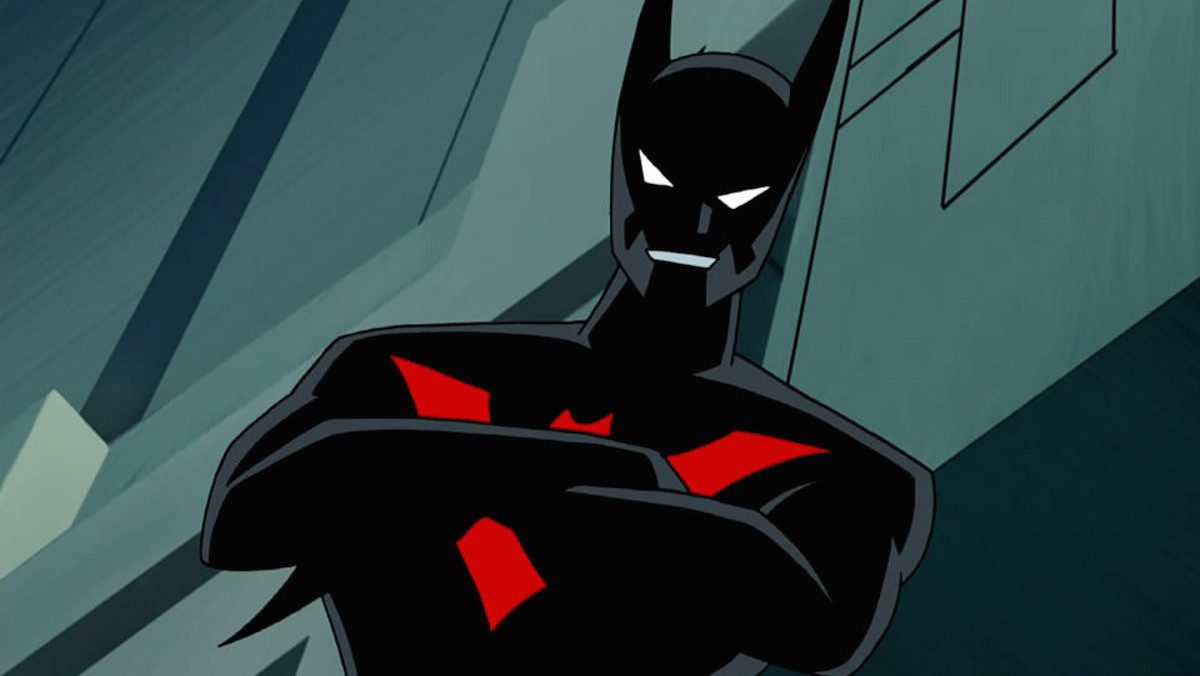 Batman Beyond turns twenty this year and to celebrate the cast and creative team reunited at San Diego Comic Con yesterday to look back at the series and announce the complete Blu-Ray collection.

“We did have a lot of freelance writers pitch us stories that sounded like old Batman: The Animated Series stories, but in the future,” Timm said. But that was not the flavor they were looking for. They wanted the show to have a different feel, not just be more of the same but set in the future. This is what makes Terry so important. He’s not Bruce. “If we had one star of the show, it was more about Terry than Bruce,” Timm said, “We wanted to make the show feel fresh and new.”

Murakami agreed, adding “We took away Bruce’s fortune and the villains were more powerful. Bruce had to start all over again. It was kind of a Robin Hood story, and then Terry is from the lower part of the city.” 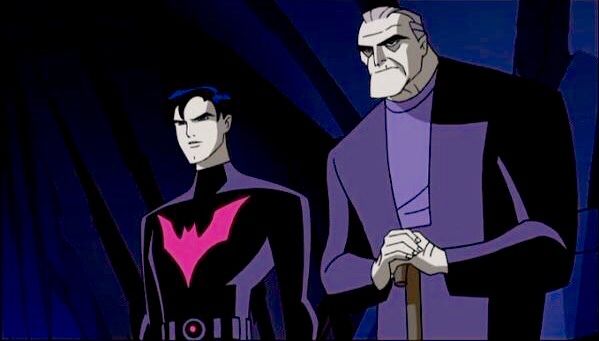 That relationship would become the heart of Batman Beyond and was mirrored in the real world with Kevin Conroy and Will Friedle. “He mentored me in the voice-over world like Bruce mentored Terry, so there were ways where [our relationship] kind of mirrored that,” Friedle shared before joking that their real world relationship was “less violent”.

“We didn’t think for a second about recasting,” Timm told the audience. The plan was always to maintain continuity with Batman: The Animated Series and Kevin Conroy was always going to be Bruce Wayne.

As for casting their new Batman; “It was my wife.” Timm revealed. “My wife and I would watch TGIF because we liked Sabrina and Boy Meets World… then she said ‘He’s got a really great voice!’ And it just stuck in my head.” Sabrina‘s Melissa Joan Hart would go on to be cast as Dee Dee in Return of the Joker.

The idea of two Batmen, of Bruce mentoring the next generation, is really what made the series unique. Terry may not have been the detective that Bruce was, but he had other strengths. “Terry likes being Batman,” Murakami said, “Terry isn’t tortured the way Batman is.”

As part of keeping things fresh and attracting a younger audience it was important that to Timm that Batman Beyond sounded different from the classic sounding Batman and Superman: The Animated Series. Originally he didn’t even want the old music team to do the show, but then their rock and electronica inspired demo blew his mind. 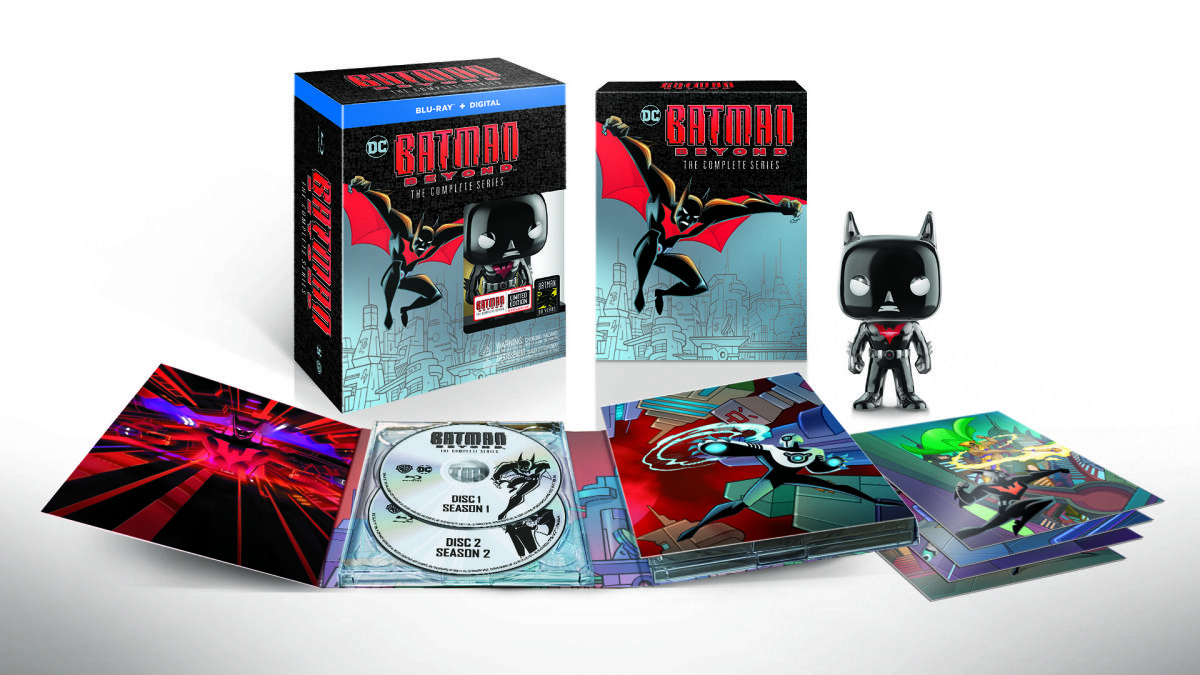 Then came the big announcement. Batman Beyond has been completely remastered for a limited edition Blu-Ray release! Forty one of the series fifty two episodes have been fully remastered from their original 35m film source or OCND format (a digital scan of the original negative), with the remaining eleven “Smart Rezzed” from standard definition Digibeta video as the originals were too time-worn to be restored. Whilst the “Smart Rezzed” footage is a noticeable improvement over the original standard definition, viewers will still be able to notice the difference between these episodes and the fully remastered ones. The eleven affected episodes are Eyewitness, Final Cut, The Last Resort, Armory, Sneak Peek, The Eggbaby, Zeta, Plague, April Moon, Sentries of the Lost Cosmos, and Speak No Evil.

The collection also includes multiple featurettes, including two that are new for this collection, four episode commentaries, and a newly remastered version of Batman Beyond: Return of the Joker.

Following a preview of the newly remastered footage, which reportedly looked very crisp, the panel moved to an audience Q&A.

Asked about the series villains, Timm confirmed that they “really tried to avoid just bringing back all the old villains,” and instead “used them as archetypes.”

Embellishing a little, Goodman added “The classic villains that did show up were the ones that made sense to show. Once this show was established and we know what it means for Bruce to show up now … This was more of a sci-fi show than classic Batman. We were doing something futuristic … We had a lot of chemical vat villains and mutations and genetic splicing … The rogues gallery fell somewhere between Batman and Superman.”

Of course you can’t talk about returning villains without mentioning Mark Hamill’s Joker. The clown prince of crime returned for his darkest story in the DCAU in Batman Beyond: Return of the Joker.

“Oh, that pain in the butt,” Andrea Romano exclaimed before revealing that the Joker originally didn’t laugh in the Return of the Joker script as the character needed to be extra dark. Of course Hamill picked up on the no laughs right away. “He loves to ask questions and bring ideas,” Romano said, “He knows so much about the DC world, so he could speak to Bruce about things that are beyond me.”

“I wish you could see Mark in the booth,” Conroy added, “He’s got a Jim Carey face. It’s so rubbery!” He also spits during his performance, but I’m sure everyone will agree with Will Friedle that the resulting voice is “so worth it.”

But there’s one villain who didn’t quite make the cut. “Catwoman was going to be our leading villain in the second movie,” Timm confirmed, “She was the one who cloned Bruce to create Terry, but that was going to be our big surprise in our next movie.”

Ultimately, the second movie wouldn’t happen, and the idea of Terry being a clone was instead reworked for Justice League Unlimited‘s Epilogue episode.

Clone or son, Terry and Batman Beyond embodied that idea that anyone could be Batman, and created a hero for a new generation. A hero that may return one day. A young fan, dressed as Terry’s Batman, asked the panel when the next season will be released. “I’ll tell ya: if this thing sells like crazy on Blu-Ray and creates a giant buzz, that will make it more possible that it would happen,” Timm replied, “We would totally do it.”

Thanks to CBR and Newsarama for the panel coverage.