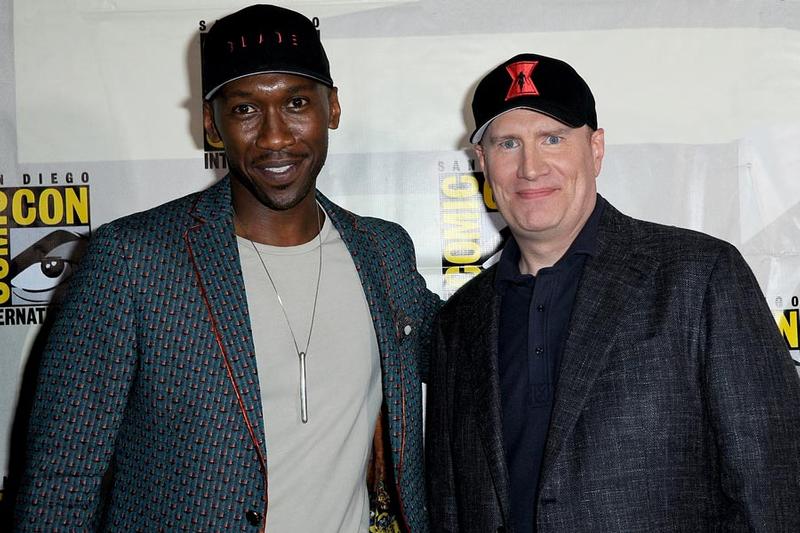 Marvel fans lost their mind when Kevin Feige revealed that Blade would be joining the MCU at their San Diego Comic Con panel last week, with a reboot of the film series that was previously developed by New Line, but it seems that Blade won’t be a part of Marvel’s Phase 4.

A Blade film starring Oscar-winning Mahershala Ali was announced at the end of a panel that had set out the names of dates of Marvel’s next 10 projects, including films and Disney+ series. However, while Blade was announced, its date was completely unlisted. Kevin Feige has since revealed that this is because Phase 4 actually ends in November 2021 with Thor: Love and Thunder, and Blade will come later. Many had assumed that only the first half of Phase 4 had been revealed, seeing that Phase 3 ran from 2016 to 2019. In comparison, Phase 4 only runs from 2020 until 2021. In an interview with Collider, Feige confirmed that the films announced were the entirety of Phase 4:

“It’s the complete Phase 4. The way I announced Phase 3 five years ago – things can move, things can change as they did if you go back and look at what we talked about five years ago for Phase 3 – but we’ve been working on this for quite a while and it’s pretty set, but there are always changes possible.”

So it’s possible that Blade could be pushed up and come out in 2021, but at the moment it won’t be released until 2022 at the earliest. That will put it in the Phase 5 wave of films, along with a bunch of other established Marvel properties – Phase 5 is almost certainly when we will be seeing Guardians of the Galaxy 3, Captain Marvel 2, and Black Panther 2, while Feige confirmed that Fantastic Four and X-Men films are also in the works and will presumably be coming out towards the end of that slate.

We know that Guardians has a draft script and James Gunn directing, while Ryan Coogler has just sat down to work on Black Panther 2, so it seems reasonable that they would be first up in 2022. Captain Marvel 2 doesn’t have a creative team attached to it yet. It’s possible that Blade could be released before the Captain Marvel sequel for a 2022 release window, but if not, then we won’t be seeing Mahershala Ali suiting up as the Daywalker until 2023 at the earliest.

Mahershala Ali’s casting as Blade seems to be further proof that Kevin Feige doesn’t much care for the Marvel TV side of the Marvel Cinematic Universe, as Ali becomes the second character from Netflix’s Luke Cage series to portray a different character in an MCU film. It was understandable when Alfre Woodward, who played villain Mariah Dillard on the show, was hired to play a small role in the first act of Civil War before taking on a major role in both seasons of that show. Some fans did view it as a side swipe from Feige, as if the continuity error didn’t matter when it came to the Netflix shows. However, the casting of Ali does suggest raise a question of how relevant the Netflix shows are in the larger MCU canon. Mahershala Ali played the villain Cottonmouth in Luke Cage and was killed off halfway through Season 1, and is now getting to star in his own film as a completely different character.

With the Netflix shows all cancelled and the characters used all on pause for a little under two years each, maybe it doesn’t really matter that much anymore. It’s just interesting to see Feige pretty much confirm how unconcerned he is with that corner of the MCU. In Feige’s defence, Mahershala Ali does seem like the perfect choice to play Blade, and ignoring him because he’d already starred in a cancelled Marvel show would be very silly.

Feige has also talked about introducing the Blade IP to the MCU before, back in an interview in 2017:

“We still think he’s a great character. He’s a really fun character. We think this movie going into a different side of the universe would have the potential to have him pop up, but between the movies, the Netflix shows, the ABC shows there are so many opportunities for the character to pop up as you’re now seeing with Ghost Rider on Agents of S.H.I.E.L.D. That rather than team up with another studio on that character, let’s do something on our own. What that is? Where that will be? We’ll see. There is nothing imminent to my knowledge.”

Of course, we now know that Blade is coming. But it won’t be in Phase 4 of the Marvel Cinematic Universe.