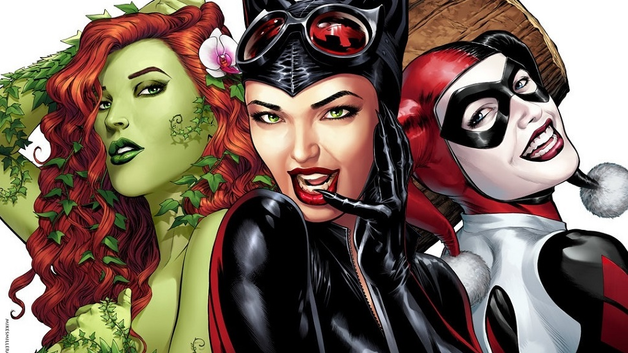 DC Films have been incredibly confident with Birds of Prey since the screenplay from Christina Hodson came into their offices, and recent buzz from the film’s apparent early test screenings indicate that the studio has a crowd-pleasing hit on their hands. It seems as though they’re so confident that not only will Hodson be back to write a Batgirl screenplay, but there will be a spiritual trilogy between Birds of Prey and two follow-ups: Gotham City Sirens and Birds of Prey VS Gotham City Sirens.

GeeksWorldWide are reporting that the pieces are moving into position for Warner Bros. to set up a female-led series of films set in Gotham City, waiting to be greenlit closer to (or after) the release of Birds of Prey (and the Fantabulous Emancipation of One Harley Quinn) early next year. From the sound of things, Harley will be jumping from being a not-quite member of the Birds of Prey (whose ranks include Black Canary, Huntress, and Cassandra Cain) to a full-time member of the Gotham City Sirens (a team that includes Catwoman and Poison Ivy, the latter of whom Harley has a close friendship and occasional romantic relationship with), and at some point, both teams will be squaring off against one another. All this is set to happen between The Suicide Squad and a possible third film in that series on Harley’s end, while the Birds of Prey side of things may get expansions with Batgirl and a possible standalone sequel that adds that superheroine to the team. GWW have reported on some of these rumors before, but now it sounds like they’re becoming increasingly likely.

What’s curious is how this will relate to the new Batman trilogy from director Matt Reeves. Reeves’s take is said to be pretty self-contained in nature, and it might not even be in-continuity with the other DC movies (and, at the least, it’s not expected that the trilogy will put Batman in the mindset where he was content to let criminals die at his own hand, something that was controversial about Ben Affleck’s version of the character). However, Warner Bros. likely want to keep Robert Pattinson on-board as Batman for more than three movies, so it’s possible that the two will somehow get connected down the road. Since the movies are meant to represent Batman early on in his career, and the version we’ve already met has been Batman for two decades, there’s probably room for a compromise, even if having a strict continuity isn’t the focus of DC Films at this point in time.

Because of how Reeves is approaching his story, it raises questions about the Bat-Cast. Set photos have revealed that Joker apparently has an obscured cameo in Birds of Prey that explains why Harley Quinn is no longer at his side. While the character retains Jared Leto’s likeness as he appeared in Suicide Squad, Leto was filming Morbius at the time that this scene was being filmed, so it’s a body-double who will likely be dubbed over. It’s also likely that Reeves’s second or third films will include a new version of the character whose actor, like Pattinson and Affleck, will likely take over for Leto. It also suggests that Catwoman, a key member of the Gotham City Sirens, will either be portrayed by her actress from The Batman, a new actress, or will be replaced by another character altogether (as Batgirl was in Birds of Prey). Speaking of Batgirl, that superheroine is in the same boat, since she is set to lead her own franchise and likely join the Birds of Prey team after her absence from the first outing; an appearance in the Reeves trilogy is unlikely. These are questions that won’t come into play until a while from now, so DC Films has no obligation to answer them immediately, but they will have to think about them once they stop treating each effort as a ‘one-movie-at-a-time’ plan.

Birds of Prey (and the Fantabulous Emancipation of One Harley Quinn) is directed by Cathy Yan from a screenplay by Christina Hodson. The film is due to hit theaters on February 7, 2020. Harley Quinn will subsequently appear in writer-director James Gunn’s The Suicide Squad, which arrives on August 6, 2021. Beyond that, the future isn’t set in stone, but Harley will pop up in plenty of movies to capitalize on actress Margot Robbie’s popularity.