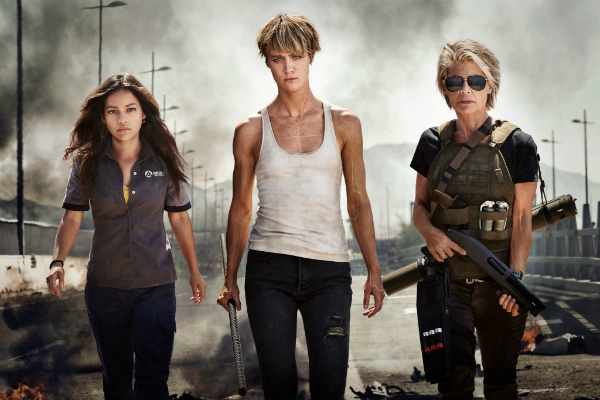 The first trailer for Terminator: Dark Fate has arrived, showcasing a direct sequel to Terminator 2: Judgment Day that suggests that the future was not set quite in the way that Sarah Connor (Linda Hamilton) would have hoped for after completely demolishing Cyberdyne Systems well before they could complete Skynet.

Yesterday, the first poster for the new Terminator film was released online, promising viewers to expect to see “the day after Judgment Day”. The poster, which emphasizes the involvement of producer James Cameron (who had no involvement in the three other movies that followed Judgment Day) and Deadpool director Tim Miller, can be seen below:

Welcome to the day after Judgment Day. Check out the official poster for #TerminatorDarkFate. Teaser trailer tomorrow. pic.twitter.com/syt2xrSBru

Judgment Day itself is the name that the survivors of Skynet’s engineered nuclear holocaust would use to describe the event which killed most life and left the survivors as easy pickings for an army of Terminator soldiers, until John Connor led a resistance to destroy Skynet’s forces. Skynet, in a desperate attempt to prevent Connor from organizing the resistance that would prove to be their undoing, sent two Terminator units back in time: a T-800 in 1984 (a year before Connor was born to his mother Sarah), and a T-1000 to 1995 (when Connor was still a child). The Resistance would send back two warriors of their own: Kyle Reese (who is John’s father) to 1984, and a reprogrammed T-800 to 1995 (which would destroy itself upon completing its mission so that Skynet could never be created).

While the destruction of Cyberdyne Systems seemingly signaled the end of the Terminator threat and Skynet alike, something went wrong in the years that followed. In 2022, circumstances have changed once again, and Sarah Connor has to get back into action. It’s revealed that Skynet has managed to send a third Terminator back in time to that year, even though the Judgment Day of 1997 was prevented. Rather than target the Connor family this time around, this new kind of Terminator (Gabriel Luna) targets a young woman named Dani Ramos (Natalia Reyes). Connor will enlist the unlikely help of a cybernetic human named Grace (Mackenzie Davis), who came from the same future that this new Terminator came from, along with the man whose younger appearance served as the template for the T-800 soldiers (Arnold Schwarzenegger). You can see the first look at Dark Fate in the trailer below:

Terminator: Dark Fate is a sequel-boot that ignores the events of 3: Rise of the Machines, Salvation, and Genisys in favor of delivering what Paramount hopes will be a true successor to Judgment Day. Hamilton previously turned a role in Rise of the Machines down because she felt that the franchise didn’t need to continue after Judgment Day, but now she changed her position. According to The Hollywood Reporter, she fell in love with the script, and couldn’t turn it down this time:

“Only a script, story, cast director like this could bring me back; [it’s] a once or twice in a lifetime event comes along that you can’t turn away from.”

The footage screened earlier this year at CinemaCon was praised, with some calling it a return to form for the franchise. A behind-the-scenes featurette, featuring commentary from franchise creator James Cameron, was released alongside the trailer:

Cameron talks supportively of the film here, although it’s worth noting that he was similarly supportive of Genisys before fans and critics largely rejected that film. Here’s hoping that this new take can avoid that – wait for it – Dark Fate. …Yeah, I’ll see myself out.