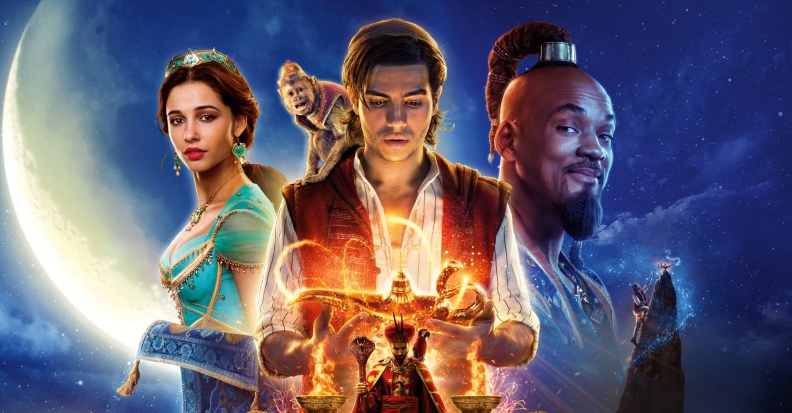 To say I’ve been looking forward to Aladdin for a long time is a bit of an understatement. It was the first movie I wrote about when I joined MovieNewsNet, and it’s my most anticipated of Disney’s live action re-imaginings. If you’ve heard anything during the build up to release you probably already know that reactions to the film’s marketing have swung wildly between positive and negative, so now that it’s here, how does the movie measure up? Does it take you to a whole new world or should the magic lamp have remained locked in the Cave of Wonders? Read on to find out.

Since Disney’s live action remakes have ranged from straight adaptations to quasi-sequels to total re-inventions let’s start by saying that Aladdin is one of the more direct adaptations, but it’s more like The Jungle Book than Beauty and the Beast. That is to say that all of the major story beats are there, but how the story moves between those beats is different. Most of the time these are just subtle changes, but there are a few significant ones as well. Being honest, this is the approach I like best for these movies. It keeps the story and characters true the original, but also offers a new perspective that gives the film a freshness and, whilst there will always be comparisons with the original, allows it to stand better on its own. 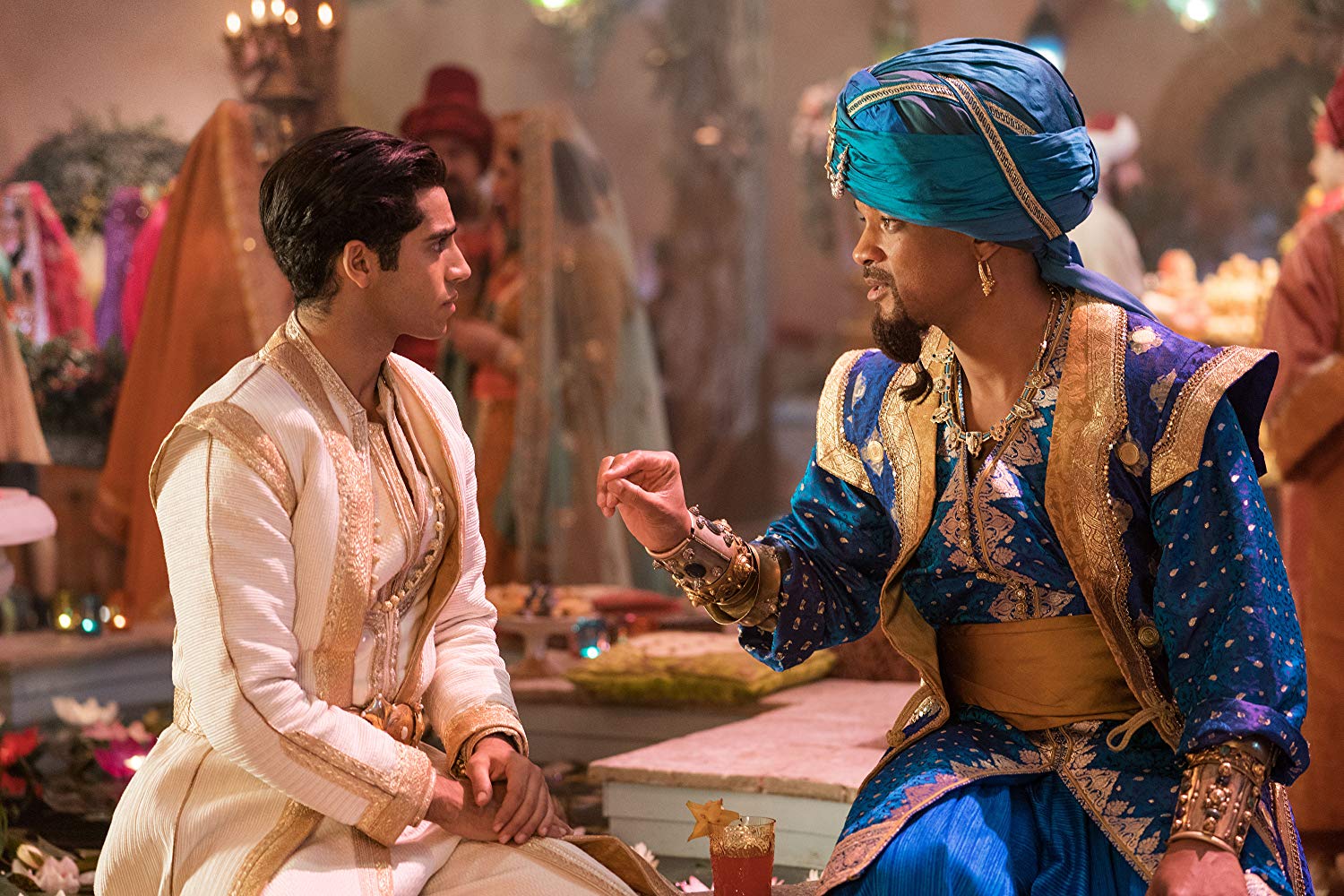 Without a doubt, Aladdin‘s biggest strength is its three leads. Mena Massoud, Naomi Scott, and Will Smith have been extremely well cast as Aladdin, Jasmine, and the Genie. The film quickly establishes Massoud’s Aladdin as the street rat with the heart of gold, doing what’s right and helping those less fortunate than himself even though life has never given him a break. Massoud has an easy charm and winning smile, and you can’t help but root for the young hero even as he makes mistakes. Scott’s Jasmine is a natural and fitting evolution of the beloved Disney Princess, and her character arc benefits the most from the film’s longer run time, with her desire to become Sultan and do what’s best for her people driving her actions. The young leads have great chemistry together and you can’t help but soar with them as they take the magic carpet ride. If anyone had big shoes to fill its Will Smith. No one can replace Robin Williams, so Smith doesn’t try to. Instead he brings a lot of himself to the role, giving the Genie a different kind of humor and energy. It’s an approach that worked for Disney on stage, and works again here in live action. Smith shares a fantastic bond with Massoud, and watching the two riff off each other as Genie introduces Prince Ali to the royal family is one of the most hilarious moments in the film. The relationships between Aladdin and Genie, and Aladdin and Jasmine are the absolute heart of the film and I’m so happy they got it right.

I loved the new history that writers Guy Ritchie and John August gave to Jafar, adding another layer to the character and making him a cautionary tale for Aladdin should the young hero be corrupted by the power of the lamp, whilst also setting up his inevitable downfall from the moment we meet him. Marwan Kenzari does a solid job as the scheming Vizier but it’s a much straighter role, and Jonathan Freeman’s sinister and maniacal portrayal casts a long shadow that he unfortunately can’t escape from. This isn’t to say Kenzari gives a bad performance, he doesn’t and I enjoyed his Jafar, but it isn’t as memorable. Which brings me to my biggest disappointment; Iago. In the animated movie Gilbert Gottfried gave an incredibly over the top performance that made the obnoxious parrot one of Disney’s best evil sidekicks. In live action Iago does little more than mimic. Alan Tudyk does fine with what he has, but there’s not much there to judge. It works in the context of the movie, but knowing the original I can’t help but feel a lot more could have been done with the role. Whilst I don’t want to use the word realistic when talking about a movie featuring a Genie and a flying carpet, it certainly seems that they were going for a less over the top, more grounded take on the villains. And it does work within the context of the movie.  But on reflection it makes the characters less memorable and feels like this is one change that doesn’t land as well as it could, with Iago especially being under served.

The supporting cast work well, Nasim Pedrad’s Dalia is a wonderful addition to the ensemble, giving Jasmine a friend that she can bounce off the way Aladdin does with Genie. Navid Negahban successfully transforms the Sultan from comic relief into a more serious role which really helps serve Jasmine’s character arc, whilst Numan Acar’s Hakim brings more depth to the captain of the palace guards. And Billy Magnussen gives a delightful comic turn as one of Jasmine’s suitors.

The story of Aladdin is one almost everyone knows. The tale of a street rat who finds a magic lamp and wins the heart of a princess by learning to be true to himself. Writer John August and co-writer/director Guy Ritchie don’t try and reinvent the wheel. Opting instead to stay true to what’s come before whilst making enough changes to keep things fresh and engaging. The new opening, and our new introductions to Aladdin and Jasmine, is a perfect example of this. The pacing is quick and effective, with the opening being even more economical than the animated film it’s based on. Rather than padding things out, the film uses its longer run time to dig deeper into its core relationships and that is where it excels.

Of course it wouldn’t be a Guy Ritchie film without the action! From escaping the guards to escaping the Cave of Wonders, Ritchie sets a fun and frantic pace with the action, even timing it to the music for One Jump Ahead. Whilst his decision to change the action climax of the movie may prove controversial amongst Disney fans, I think it was the right choice, delivering a bigger action set piece. And then there’s the dance scenes! Making a song like Friend Like Me work in live action can’t have been easy but Ritchie, choreographer Leah Hill, and the visual effects team pulled it off. Visually the film looks stunning. Agrabah is bright, and bold, and colourful, just as it should be. The sets and the costumes look brilliant (I’ve even warmed up to Aladdin wearing a shirt). And yes, Will Smith’s blue Genie looks great. Abu looks amazing, Disney certainly knows how to bring CGI animals to life! 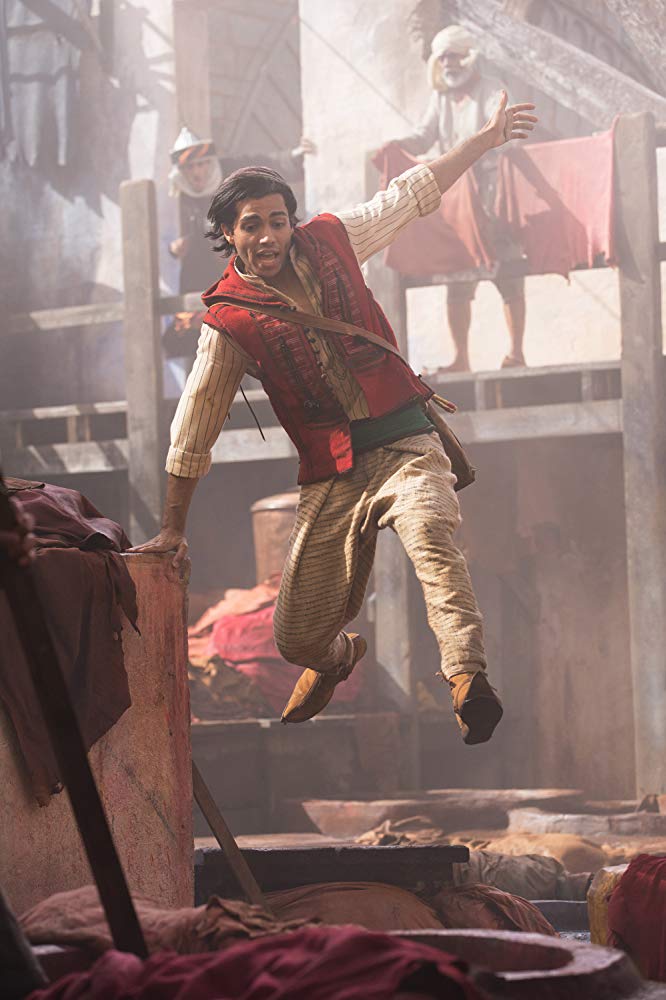 And then there’s the music. If you grew up on the original then Aladdin’s score will hit you straight in the nostalgia. There’s so many call backs to the original score, so many moments where that old music comes in at just the same time and my inner child just grinned from ear to ear. The songs are a mix of old and new, with The Greatest Showman’s Pasek and Paul contributing new lyrics for Arabian Nights, Princess Jasmine’s new song Speechless, and an emotional new reprise of One Jump Ahead for Aladdin. I’d say I was disappointed to lose Jafar’s Prince Ali Reprise, and I am, but giving that moment to Jasmine just works so well for her character and the film, and Naomi Scott has such an amazing voice. Will Smith’s new takes on Friend Like Me and Prince Ali are a lot of fun. Personally, my tastes lean more towards Broadway renditions, but I did enjoy what Smith did with them, and I’m glad he was given the freedom to do his own thing. I loved the big ensemble ending to Prince Ali which was something Will Smith pushed for so I want to credit him for that. And prepare to fall in love with A Whole New World all over again. The magic carpet ride remains one of the high points of Aladdin in every version Disney have told.

Aladdin was my favorite movie as a kid, and remains one of my favorites to this day. So when they announced the live action remake I was equal parts excited and nervous. When Disney get their remakes right, you can get something that actually improves on the original, but when they get it wrong you can end up with an adaptation where the title character is almost unrecognizable. Whilst Aladdin doesn’t manage to top the original, it does succeed at creating a worthy successor with a lot of heart. It’s more than a beat for beat remake, offering a new take on the ancient tale. I think The Jungle Book still remains Disney’s best live action adaptation from a critical perspective, but I had a lot more fun at Aladdin and I can’t wait to see it again when it opens.