UPDATE! ‘Guardians of the Galaxy Vol. 3’ May Still Use James Gunn’s Script 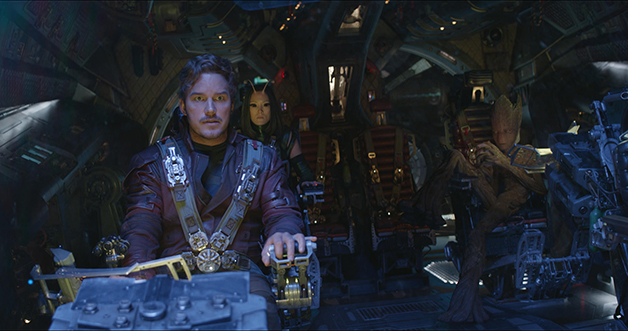 While Marvel fans are still reeling from the suddenness of James Gunn’s firing from Guardians of the Galaxy Vol. 3, a new report suggests that Marvel may use (or at least adapt) his script for the trilogy-capper.

Earlier today, a rumor from Omega-Underground co-founder (and now Geeks WorldWide contributor) Christopher Marc heard a rumor that James Gunn’s script was going to be scrapped as a way of severing ties between Gunn and Marvel. Since Disney, the parent company of Marvel Studios, was the one to make that call, they would not be able to hire Gunn again:

Looks like Marvel Studios may have indeed tossed out James Gunn's script for GUARDIANS OF THE GALAXY VOL.3. Something I expected was the next step, if this is confirmed there will be a massive production delay ahead for the sequel. pic.twitter.com/qgkcsbdvmC

I should note that Marc and the site that he writes for are reputable, and he has made it clear that talks are ongoing. However, The Hollywood Reporter is telling a different story. As discussions about Gunn’s sudden severance from the Disney family continue, plans change, and now it’s sounding like the people at Marvel Studios are fighting to make sure that Gunn’s script for Vol. 3 is the one that gets used, and that Disney have no issue with this:

“Some experienced talent reps estimate that due to the unique situation, Gunn could receive a payout of $7 million to $10 million, if not potentially higher. And, more importantly, he would be free to take on another project immediately. Also affecting the negotiations is that Disney plans on using Gunn’s script for the third Guardians pic, according to sources.”

Effectively, Disney is having their cake and eating it, too: Gunn has been fired from directing the film, but they can still make use of the story he came up with without necessarily having to delay the film’s projected release date. That would give Marvel Studios about four months to find a replacement if they want to make the initial January 2019 start date for filming, or slightly longer if the production start is pushed back a few weeks. Guardians of the Galaxy Vol. 3 was expected to open early in Summer 2020, so Marvel will have to act fast. Insiders also add a bit of informed speculation suggesting that Gunn could return for a different project down the road if negotiations play out in his favor:

“There may be an unexpected twist to the story. Two sources say there is a hope through the talks that Gunn could return in some fashion, even if it’s to develop and direct another Marvel movie. “An end-all verdict hasn’t been issued and conversations with Marvel are still ongoing,” says one source familiar with the proceedings. That leaves Gunn and his potential suitors waiting to see the outcome of the talks. “Most people feel his comments were coming out of his brand of comedy [at the time he made them],” says another studio exec. “Having an inappropriate sense of humor shouldn’t be a crime.””

Meanwhile, other studios are looking to get into talks with Gunn once he is officially finished working for Disney. Warner Bros. are said to be one of the studios most interested in hiring Gunn, with common speculation indicating that he’d be wanted for a DC Films project (something he’s said he’d be interested in doing after he was finished making Guardians of the Galaxy movies). In all likelihood, there will be quite some time that passes before Gunn works on another studio project as a way of letting the controversy over his offensive jokes made years ago subside.

Gunn most likely will not be the one to direct the third Guardians of the Galaxy film at the current rate, but having his story remain in-place is probably the best move that they can make. The plot in question is one that’s said to be crucial in setting up the future of the Marvel Cinematic Universe, and throwing that for a loop could hurt the bottom line of Disney’s biggest money-making movie franchise as it moves on beyond the original team of Avengers; it would be unsurprising to learn if Marvel Studios President Kevin Feige (who has wisely remained quiet about this dilemma so far) is on Gunn’s side for exactly this reason.

Deadline is also throwing its hat into the situation and is indeed suggesting that Feige and those working for him want to keep Gunn on in some capacity:

“…Sources said that back channel conversations are taking place between Marvel Studios and Disney. Sources said the Marvel contingent is trying to persuade Disney to explore a compromise that might bring Gunn back into the fold for Guardians 3, something that clearly would be best for the franchise. There is no clash or strong arming here. I’m told it’s a discussion that comes in the wake of the whole cast declaring their loyalty to Gunn, whose abrupt exit has put a thriving film franchise in a rocky place. One would have to label this 11th hour approach to be a long shot, but the community is talking about it.”

As for what capacity that Gunn could return in, it’s currently unclear. Having him reinstated as director would be something of a long-shot at this point, but it sounds like there’s more than enough anger coming from inside Marvel that completely severing ties with Gunn before the movie is finished, which is something that the cast are clearly displeased with (Dave Bautista especially). Disney is faced with a decision that could potentially cause a lot of internal upheaval, but they can sidestep some of the issues if the situation is handled with care. With public opinion generally moving toward Gunn’s side, it seems like at least some of his personal vision for the closing chapter of his trilogy will make it into whatever is actually made.