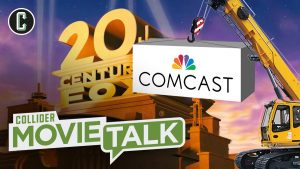 Comcast pursues an all-cash bid for 21st Century Fox; Warner Bros. Pictures officially sets a release date for Sherlock Holmes 3; Beauty and the Beast writer Evan Spiliotopoulos is set to write the script for a sequel to the cop thriller Bright; Mamma Mia 2 gets a trailer; The third installment in the beloved franchise, titled Bill & Ted Face the Music is officially in pre-production and Live Twitter Questions.