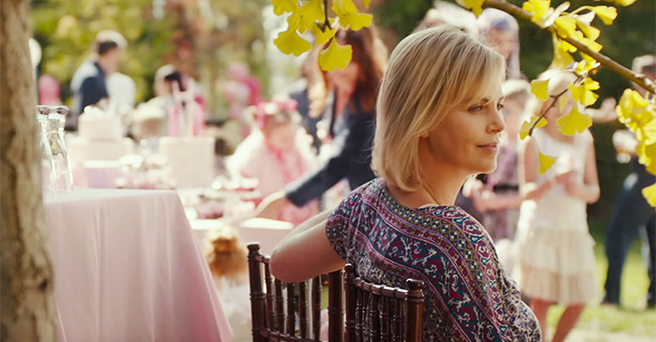 Everyone is still riding high on the success of Avengers: Infinity War. With the Marvel film currently raking in all of the money in the world, it’s easy to forget that there are still other movies playing in theaters. Yes, Infinity War is an impressively large spectacle to behold (I’ve seen it three times already), but it’s nice to have a little film like Tully bring me back down to Earth.

Directed by Jason Reitman, Tully is about a struggling mother named Marlo. With two children already proving to be a handful – and another baby on the way – Marlo finds herself being stretched too thin. Even with help from her husband, Marlo sees her life as a series of monotonous and exhausting routines, leaving her feeling beaten and worn out at the end of each day. It’s clear that Marlo is a caring mother who loves her family, but she is just unhappy with her current situation. Though she is hesitant at first, Marlo eventually comes around on the idea of getting some extra support around the house and soon finds herself forming a unique bond with a young night nanny named Tully. 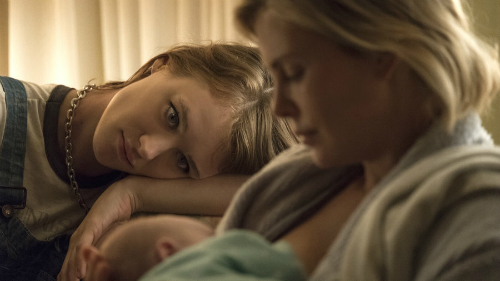 Reitman re-teams with writer Diablo Cody to mark their third collaboration together. The two make a strong pairing and their dynamic really shines through in this film. The duo’s blend of serious drama with lighthearted comedy makes Tully a delightful treat that feels grounded in reality. Though Tully may not be as memorable as Juno, it does at least feel like an improvement over Young Adult (which is already a good film as it is). Coming off the heels of a gigantic movie like Infinity War, I doubt that that a little film like Tully will be able to find a large audience, but it definitely deserves to. Tully is an extraordinarily warm and insightful film that just about anyone can relate to.

Charlize Theron stars as the lead character, Marlo, and she is wonderful. Theron isn’t afraid to showcase how unpleasant certain aspects of motherhood can be, which helps Marlo come across as a real human being. Theron even put on a good amount of weight for this role, but her performance extends far beyond just looking a bit fat. Theron’s presence just feels down-to-earth, allowing Marlo to be a relatable and empathetic character. She may be self-conscious, she may be going through a slump, and she may be feeling a bit down, but Marlo manages to find humor in all of the rough times. She tells plenty of jokes herself, but she often shrugs off society’s criticisms with a laugh – almost as if there’s nothing she can do but laugh. For example, at one point, after performing the miracle of childbirth, Marlo’s own daughter innocently asks: “what’s wrong with your body?” The following deadpan expression on Theron’s face is priceless, as Marlo clearly doesn’t even know how to respond. 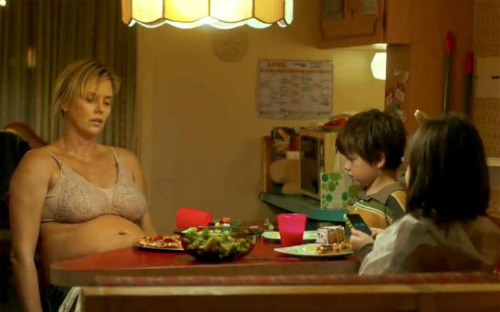 I appreciated all of the levity in this film. Though there are definitely more dramatic and serious thematic elements, Tully always managed to keep a smile on my face. Marlo especially had such a warm presence; I couldn’t help but enjoy the character’s humorous personality. Yes, humor is often used as a coping mechanism, so the comedy in Tully is used to keep the film from feeling sad and dour, as well as to provide insight into Marlo’s psyche. Life can be ugly, cruel, and unfair, so how we choose to deal with these difficulties says a lot about our identity. Do we force on a happy face just to appear normal? Do we simply go through the motions? Do we become content with our lives after a certain age? Is there even anything wrong with all of that? These are deeply existential questions that are not easy to answer, so creating a lighthearted tone for the film was a wise decision.

Eventually, Marlo caves in and realizes that she can’t be facing these problems on her own. This is where we meet the titular character, Tully. Played by Mackenzie Davis, Tully is a marvelously young, quirky, and optimistic presence. She’s youthful, energetic, full of life, and filled with a surprising amount of random factoids. Everything Marlo wishes she could still be, she sees in Tully. This creates an interesting dichotomy between the two characters, and allows for some thought-provoking dialogue about aging. You believe the bond that forms between Marlo and Tully, which only goes to show how Theron and Davis had excellent chemistry together. I assume most people will remember Mackenzie Davis from the magnificently trippy sex scene from Blade Runner 2049, but Tully really allows her to showcase her acting chops. The subject matter in Blade Runner simply called for a more stoic performance, whereas Tully allows Davis to show off a wide range of emotions.

Tully is also a rather thoughtful character that does a lot of philosophizing (as many 20-some-year-olds do). One particularly relevant question asks: if you slowly replace all of the old parts of a ship with brand new parts, is it still the same ship? This is an old question that I’m sure many people have heard before, but it goes in hand with Tully’s overall theme; is Marlo the same person that she used to be? Will Tully be the same person when she grows older? Will any of us be the same people when we grow older? Are we merely extensions of our former selves? Should we be afraid of what the future has in store for us, or should we embrace the unknown? I found it very cathartic watching Marlo growing and asking these existential questions because it allowed her to learn a lot about herself, and I’m sure a lot of other people will appreciate that aspect too.

Ron Livingston and Mark Duplass are also in this movie. Livingston plays Marlo’s husband, Drew, while Duplass plays Marlo’s brother, Craig. These are two characters that obviously want to help out Marlo in her time of need, but they don’t exactly know how to do so. It’s not easy to identify when something is wrong with someone you love, especially when they appear to just be normal. I appreciated that Tully didn’t paint Drew or Craig as negligent characters (which would have been very easy to do) because understanding what other people are feeling, or recognizing what they may be going through, is hard. Drew and Craig may have their faults, but it shows that they are both human; they may have room to grow, but so do we all. Sometimes we all just need a reminder of how a little help can go a long way. 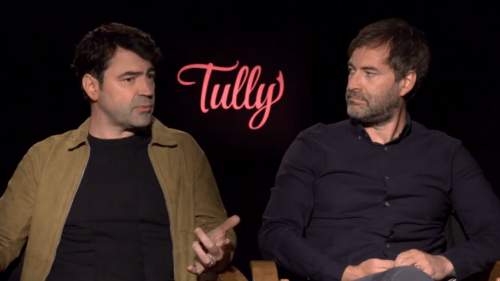 As a huge comic-book fan, I obviously loved Avengers: Infinity War. It was a great movie that provided the perfect amount of escapism for my monotonous, everyday routine. But films like Tully remind me to appreciate some of that monotony. Our lives aren’t always filled with exciting moments, but they are filled with plenty of uninteresting ones. We grow a little older each day, so we should cherish every small moment (monotonous or otherwise) while we still can. Even if we’re doing something we don’t enjoy, chances are someone else will appreciate our presence.

Tully isn’t a very complicated film, but the grounded characters and realistic subject matter makes it feel rich and complex. It’s filled with great acting, fascinating character dynamics, nice music, funny humor, fantastic editing (which emphasizes my whole spiel about monotonous moments), and introspective themes about life. Tully is a reminder that, regardless of if we are young or old, we should always be in a constant state of growth. I loved this movie as I am now, and I’m sure I’ll only appreciate it more as I get older.