Collider Movie Talk – ‘Solo: A Star Wars Story’ tracking to Make More than ‘Rogue One’ for its Opening 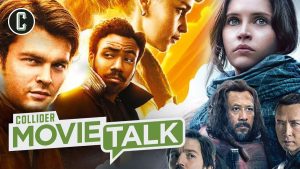 Solo: A Star Wars Story is aiming to beat the opening weekend for Rogue One ; JJ Abrams and Overlord director team up for a superhero thriller; Guy Ritchie returning to his gritty crime roots with Toff Guys; Deadpool 2 Music Video Gets the Celine Dion Treatment; A Simple Favor Trailer: Anna Kendrick and Blake Lively Get Wrapped up in a Mystery and Live Twitter Questions.